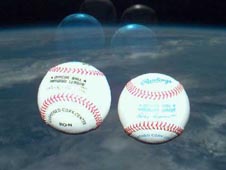 Baseballs from the American and National Leagues float near the cabin windows of the Earth-orbiting Space Shuttle Columbia, with Earth in the background. Credit: NASA The ceremonial first pitch before Game 5 of the 1995 World Series on Thursday, October 26, 1995 was thrown by Commander Ken Bowersox, onboard the space shuttle Columbia. The ceremony was transmitted from space via satellite and played on the Cleveland Indians' scoreboard at Jacobs Field and viewed by a nationwide audience on ABC-TV. This was the first time a World Series first pitch thrower was not at the ballpark to make the pitch.

The crew gathered around Commander Bowersox, two of them sporting baseball caps from the two 1995 World Series representative franchises. The American League champion Cleveland Indians and their National League counterpart Atlanta Braves were engaged in a scheduled best-of-seven World Series throughout the first portion of the scheduled 16-day mission in space. The crew took a break from their microgravity research to participate in the October classic.

On the scoreboard at Jacobs Field and on the ABC broadcast, the first pitch was preceded by footage of the launch of Columbia on October 20, 1995. After Commander Ken Bowersox was introduced, he welcomed everyone aboard Columbia and threw the first pitch.

Following the pitch, the Jacobs' Field scoreboard showed several animation sequences, including a fly-in animation from space into downtown Cleveland. On cue, spectators saw a ball appear to fly in and land in center field. 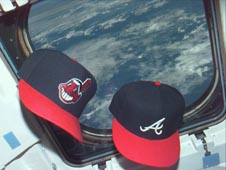 Baseball caps from the two 1995 World Series representative franchises float near the cabin windows of the Earth-orbiting Space Shuttle Columbia, with Earth in the background. Credit: NASA The baseballs flown aboard Columbia were signed by the crew. One was given to Major League Baseball and is now enshrined in the Baseball Hall of Fame in Cooperstown, N.Y. At the conclusion of the World Series, NASA Glenn participated in the Indians Parade to celebrate the "Season of Dreams" including the American League Pennant.

Thanks to the Cleveland Indians and Major League Baseball for inviting NASA to participate in the World Series.