Grow Text SizeShrink Text Size
Dr. Earls Empowered People to Do Their Best
This is the ninth in a series of articles spotlighting NASA Glenn's center directors.

As Center Director of NASA's Glenn Research Center from October 2003 to December 2005, Dr. Julian M. Earls inspired the workforce and members of the local community to not only appreciate their individual skills but also work collectively toward common goals. A strong orator, Earls built a reputation as an effective speaker who could deliver even the most serious message with hope, humor and humility. 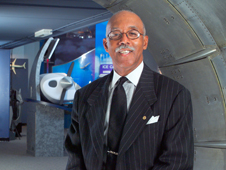 Dr. Earls in Glenn's onsite visitor center in 2004. Beginning his NASA career as a physicist in 1965, Earls worked his way through the ranks to become Center Deputy Director and then onto the Director's post. Along the way he earned nine university degrees and authored 31 publications, including the first health physics guides used at NASA. He established the center's first Radiation Safety Committee and served as its first radiation safety officer. He has been a Distinguished Honors Visiting Professor at numerous universities throughout the nation. Additionally, he was awarded NASA medals for exceptional achievement and outstanding leadership, as well as receiving the Presidential Rank Award of Meritorious Executive.

While at NASA's Glenn Research Center, Earls was a mentor to both employees and student interns. He guided many students though college and onto their professional careers. He championed Glenn's Historically Black Colleges and Universities/Other Minority Universities Research Program and its annual research conference.

In addition to his many scholarly and work-related accomplishments, Earls is an athlete. He has competed in many marathons and carried the Olympic Torch on its route through Cleveland for the 2002 Olympic Games in Salt Lake City. He retired from NASA in 2005.

AeroSpace Frontiers recently caught up with Earls and asked him a few questions about his time at NASA Lewis-Glenn, and what's keeping him busy these days.

What brought you to NASA?
NASA hired me after obtaining my Master of Science Degree in Radiation Biology from the University of Rochester School of Medicine and Dentistry and working a summer at Brookhaven National Laboratory in New York.

What is your fondest memory of your time as Center Director?
My proudest memory is the way the employees responded after the Shuttle Columbia accident on Feb. 1, 2003. Our employees were involved in the accident analysis and made significant contributions to the investigation. As members of the NASA family we grieved but responded as professionals.

What advice would you give young people entering the NASA workforce?
Concentrate on the job assigned. The best way to get the next job you want in an organization is to give 100 percent to the job you have.

What keeps you busy these days?
I am on the speaker's circuit, consulting with technical organizations, serving as Executive in Residence at Cleveland State University…and trying not to embarrass myself on golf courses around the nation.

By Doreen B. Zudell
› Back To Top