Cassini Launched at NASA Glenn
Note: This document was accurate at the time of publication in 1997. 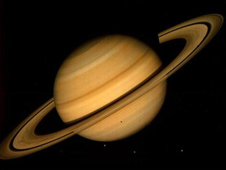 Saturn. Credit: NASA
The NASA Glenn Research Center was responsible for providing the launch services for the Cassini mission to Saturn. On Wednesday, October 15, 1997 at 4:43 a.m. EDT, a Titan IV-B with a Centaur high-energy upper stage lifted Cassini into Earth orbit and sent it on the first leg of its long journey. The Cassini spacecraft was inserted onto its trans-Venus trajectory with the expected high precision generally associated with the Centaur upper stage. The Glenn effort was accomplished in close cooperation with the United States Air Force (USAF), which manages the Titan IV-B program, and NASA's Jet Propulsion Laboratory, which manages the spacecraft and the overall Cassini program.

Cassini orbits Saturn and studies its atmosphere, magnetic fields, rings and icy moons. The Huygens probe, supplied by the European Space Agency (ESA), scrutinizes the clouds, atmosphere and surface of Saturn's moon Titan. The Cassini spacecraft is also carrying an additional special payload -- a compact disk with the digitized signatures of about a million school children.

This complex mission has been taken on by a talented team of scientists, engineers, technicians and other personnel from Cassini's government and industry partners. NASA has the ultimate responsibility for Cassini's success, including the launch service. The Glenn Research Center was responsible for integration of the spacecraft with the launch vehicle and the design of mission-unique hardware and software modifications necessary for that integration. To support these tasks, NASA Glenn contracted with the Lockheed Martin Corporation. Under a memorandum of agreement with NASA, the USAF was responsible for procuring the basic launch vehicle and conduct of launch operations. Lockheed Martin was the prime contractor to the USAF for the Titan IV-B program and its Centaur upper stage.

Building on a strong working relationship, NASA Glenn and the USAF closely coordinated the basic launch vehicle production, definition of launch support requirements, and verification that all mission requirements were met. In addition, Glenn participated in all Air Force vehicle production reviews and launch processing coordination meetings and reviews. Glenn also participated in the actual launch operations, including the prelaunch countdown.

For Titan IV missions, independent verification and validation analyses are normally conducted to assure mission success. Coupled loads, spacecraft dynamic testing, software, vehicle guidance and control, mission design, separation dynamics, and flight performance must all be assessed. Although these analyses are normally performed by a separate contractor, NASA Glenn performed these analyses for the Cassini mission as part of its integration responsibility and to take advantage of the extensive experience and specialized expertise available at Glenn. This was important because Cassini is one of the heaviest (over 5,600 kg, or 12,000 lb) and most complex planetary spacecraft ever made.

During the Cassini launch, members of the NASA Glenn team, including former Center Director Donald Campbell, monitored the flight of the spacecraft through completion of the Centaur separation including contamination and collision avoidance maneuvers. After the three Titan IV stages had burned out, the Centaur separated from the booster vehicle and burned for approximately two minutes, placing the spacecraft in a "park" orbit. After 20 minutes in orbit, the Centaur fired for the last time and launched Cassini out of Earth orbit and onto its trajectory toward Venus. The majority of Cassini's seven-year trip to Saturn is a coast through space with no power.

NASA Glenn's Communications Technology Division contributed to the spacecraft by developing a 32 GHz traveling wave tube (TWT) and it's power supply, together called a traveling wave tube amplifier (TWTA), and providing flight hardware. TWTs are an advanced type of vacuum tube amplifier that offers lighter weight, higher reliability, and higher efficiency than solid-state amplifiers at high RF power levels. Glenn also provided technical support to JPL in the development of the 8.4 GHz traveling wave tubes and their power supply. The 8.4 GHz TWTAs provide the radio link to Earth. The 32 GHz TWTA will be used, along with the 8.4 GHz TWTAs in a gravitational wave experiment, as well as in radio science experiments.