Donald J. Campbell, the first civilian director, left the post of Director of Science and Technology, Office of the Assistant Secretary of Air Force for Acquisition, to take the helm at NASA Lewis Research Center in 1994. He brought with him recognized research and leadership expertise in the areas of gas turbine engines, ramjet engines, rockets, aerospace power systems and fuels and lubricants. 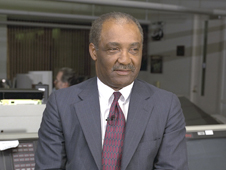 Director Campbell gave his first message to the center in 1994 from the Central Control Building,via NASA TV. Campbell began his government career in 1960 as a test engineer for gas turbine engines and engine components in the Air Force Aero Propulsion Laboratory at Wright–Patterson Air Force Base (AFB), Dayton. He rose through the ranks to become the first civilian Director of the Aero Propulsion and Power Laboratory at Wright–Patterson.

While at NASA Lewis-Glenn, he led the center in making great strides in propulsion and power technology for aeronautics, aerospace and space applications. He served as Center Director for almost 10 years and ushered in the center's name change from NASA Lewis to NASA Glenn at Lewis Field in April 1999. He was the first director of Glenn. In October 2003, he was selected to lead NASA's Special Projects Office of Nuclear Power Systems reporting to the NASA Deputy Administrator. Campbell retired from government service in April 2004.

NASA Glenn's AeroSpace Frontiers newsletter recently caught up with Campbell and asked him a few questions about his time at the center, and what’s keeping him busy these days.

Q. What brought you to NASA?
An outstanding reputation in propulsion and power technology and ongoing space research drew me to the center. The ongoing programs were raising the boundaries of technical excellence and opening new challenges for space exploration. I also had close associations with some of the NASA programs. While employed by the Air Force, I worked on several NASA projects, including space shuttle and the AF–Lewis Full-Scale Engine Research Program. I also worked with notable NASA leaders, including Dr. Wesley Harris, NASA Associate Administrator for Aeronautics.

Q. What is your fondest memory of NASA?
When I arrived at the center, the NASA Administrator was initiating major changes in the agency. Our Center Management Team took on the challenges, with the support of a workforce dedicated to accomplishing the center's mission and goals, despite personnel reductions and cost-cutting measures. We performed outstandingly to become known as the "can do center" within the agency. It showed the bottom line: employees are the brick and mortar of the center. I was also proud of developing a multicultural and diverse workforce that came together in accomplishing those goals.

Q. What advice do you give to young people at NASA?
NASA offers opportunities to work with outstanding individuals who are among the nation's finest researchers. As you enter the workforce, start with a willingness to learn from both peers and supervisors. Set both professional and personal goals. Remember the progress that has taken place from the Wright Brothers first flight to the current space shuttle. Think about the next breakthrough and how you can be involved. Stretch yourself. You won't regret it.

Q. What keeps you busy these days?
I consult for the Department of Defense, NASA and private industry, and dedicate a good portion of my time on the board of several universities and nonprofit organizations. I'm also working on my golf game to compete with fellow former center directors, Dr. Julian Earls and Dr. Whitlow Woodrow, and current Director Ray Lugo.