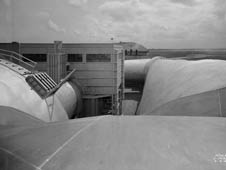 But the AWT has been idle for more than 25 years and is in poor condition. Due to safety and environmental concerns, NASA Glenn is demolishing the building. Although this historic facility is being removed, its story will endure.

The AWT's initial test on February 4, 1944 secretly studied the first jet aircraft in the United States, the Bell YP-59A Airacomet. The tunnel played a key role in improving the reliability of the B-29's Wright R-3350 engine during the final year of the war. It was also used to enhance the performance of the first U.S.-built jet aircraft, the Lockheed YP-80 Shooting Star, early ramjets, and other turbojet engines such as the Westinghouse 19XB and 24C-4B, General Electric's TG-180, Armstrong-Syddeley's Python, and the Rolls-Royce Avon engines.

After the war, jet engine performance accelerated rapidly, and the research center constructed supersonic wind tunnels. By the mid-1950s the facility's subsonic speed limitations resulted in a reduced test schedule. 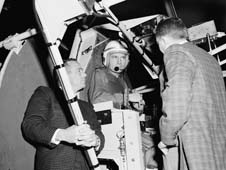 › Watch Flash Video The burgeoning space program, kick-started by the October 4, 1957 Sputnik I launch, breathed new life into the facility, but no longer as a wind tunnel. The Mercury Program used the tunnel's vast interior for escape capsule separation tests and astronaut disorientation tests in its Multi-Axis Space-Test Inertia Facility or MASTIF.

Later, with the transfer of the Centaur Program to Glenn (then NASA Lewis) in 1961, the Space Power Chamber was created within the AWT. Bulkheads were installed inside the tunnel to create two vacuum chambers. A removable dome and new pump house were installed in the smaller chamber to permit the insertion of the Centaur rocket. The new vacuum chamber was capable of simulating altitudes of up to 100,000 feet. It was used throughout the 1960s and early 1970s for Centaur system and separation tests. These tests contributed to the Surveyor, Orbiting Astronomical Observatory, MECA, and many other Centaur missions.