Everyone assumes that engines need oil for lubrication. But that has not stopped researchers at the NASA Glenn Research Center from defying traditional concepts of lubrication. At NASA's lead center for turbomachinery, work is progressing on a revolution in the use of oil-free bearings that will eliminate the need for an oil-lubrication system in high-temperature, high-speed rotating machinery. The foremost challenge for this technology is the design of an oil-free turbine engine to power 21st century aircraft.

Bearings are used between the rotating and stationary parts of turbomachinery. Ball and roller bearings are commonly used in turbine engines. These bearings require an oil lubrication system that provides a thin film of oil between the moving parts of the bearing. Without oil, the metal-to-metal contact would cause the engine to grind to a halt. Use of oil-free bearings removes the need for the oil system thus reducing weight, maintenance, and complexity of the engine. Studies have shown a potential reduction of 15 percent in engine weight.

This technology has been used for a number of years in low-temperature applications from magnetic disk drive read/write heads in PC's to the air cycle machines that maintain the pressure in commercial aircraft cabins. Recent advances in bearing design, high-temperature surface coatings and computer modeling are enabling new applications of these bearings.

Foil air bearings are self-acting hydrodynamic bearings that use ambient air as the lubricant instead of oil. Both air and oil are fluids that can perform the job of separating moving metal parts. The very high rotational speeds of turbine engine shafts (>10000 rpm) allow the replacement of oil with air. At these speeds, foil air bearings maintain the air film between moving parts by actually pumping air between the rotating and stationary surfaces. Air is drawn in and sticks to the bearing surface, no matter how fast it is moving.

The pumping of air between the moving surfaces creates an air pressure that generates a load-carrying capacity. The trapped air and its cushioning effect act just like the air in a car shock absorber. These bearings provide a stiff, shock-tolerant support for rotating machinery. At high speeds, a very thin layer of air, just under 0.001-in. thick, can support hundreds of pounds.

The weight that a bearing can support is represented by its load capacity. For a foil air bearing, the maximum load capacity is dependent on the design of the top and bump foils, diameter, and length and speed of the rotating shaft. A faster shaft speed increases the load capacity by pumping more air between the top foil and the shaft. Larger bearing size also increases load capacity by providing a more bearing supporting area. The foil design has a different effect. It determines how quickly the load increases with speed for a particular bearing. Early designs used a uniform corrugated bump foil (GEN I). Air leakage at the edges of the bearing caused it to have a relatively low maximum load capacity. Current designs (GEN III) are more intricate with multiple slits in the foil and changes in the number or spacing of bumps across the foil. These design features are better at trapping and maintaining the air film between the shaft and top foil. These refinements have resulted in great improvements in the weight that can be supported by foil air bearings.

Designers must tailor features of the bearing for a specific application. The stiffness of the backing bump foil is varied to maintain the thin compressed film of air and reduce air leakage out the sides of the foil. This will set the load-carrying capacity of the bearing. Also, high rotational speeds can make the shaft vibrate much like having an out of balance tire. These vibrating modes can be predicted with a rotordynamic model. This computer model is used to predict the forces on the bearing and the motion of the overall shaft-bearing system. With changes in the shaft-bearing diameter, length, and thickness and the location of the bearing on the shaft, these vibration modes can be eliminated. Computer models let designers try out the design without going to the expense of building and testing actual hardware.

Traditional ball and roller bearings have rotational speed limits. At high speeds, the balls and rollers are forced away from the shaft and place large stresses on the bearing. Foil bearings do not have this limitation as there are no rotating parts of the bearing except the shaft. 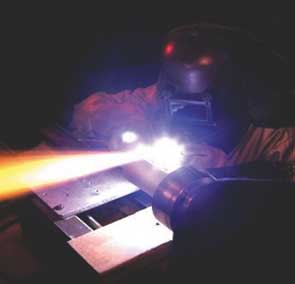 Until recently, foil air bearings were relegated to applications under approximately 400 °F. One obstacle was the need for a high-temperature coating on the shaft. During startup and shutdown, the bearing and shaft make rubbing contact until sufficient rotational speeds pump air into the bearings. To reduce wear, a dry lubricant coating is applied to the foil and shaft. Most current foil-bearing applications use a polymer coating such as Teflon® that is limited to about 400 °F. NASA Glenn Research Center pioneered new surface coatings that have pushed this upper temperature limit from about 400 °F to over 1200 °F.

These new coatings are applied by plasma spraying the shaft and then finish grinding it to specification. This results in a hard, wear-resistant coating that meets the life and temperature requirements of the bearing. With the advent of new bearing designs, foil air bearings are now ready for higher temperature environments.

Foil bearings now excel where high temperature and high rotational speed bearings are needed. The turbocharger test showed the bearings are candidates for operation in the hot section of turbine engines without the need for cooling. 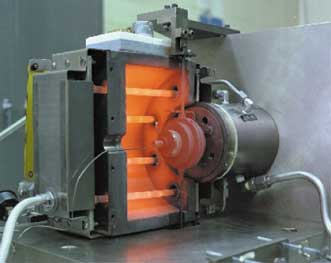 NASA Glenn Research Center has developed a patented self-lubricating bearing material (U.S. Patent #5866518) capable of a wide temperature range of -250 to 1650 °F. The PS300 coatings and PM300 powder metallurgy system is a series of self-lubricating composites with a duplex microstructure consisting of a hard nickel-chrome/chrome oxide phase with a soft noble metal and stable fluoride phases. The composition of the bearing material acts as a system in providing lubrication over a wide temperature range. The ratio of hard to soft phases can be tailored depending on design requirements such as conformability and desired thermal expansion coefficient and hardness. Glenn has also licensed the coatings for use in powder metallurgy bearing products.

NASA Glenn Research Center is working with Williams International to leverage the success of the recently completed NASA General Aviation Propulsion (GAP) Project. This project resulted in the development of the Williams FJX-2 turbofan engine. The FJX-2 is a 700-lb thrust engine that weighs under 100 lb with a 14-in. inlet and only 41-in. long. A derivative of this revolutionary engine, the EJ-22, is being FAA certified and will be used on the twin engine Eclipse 500 jet.

NASA is currently working with Williams and Mohawk Innovative Technology (a foil bearing manufacturer) to make a future derivative of the EJ-22 the first oil-free turbine engine by using foil air bearings. Removing the oil system components will reduce weight and maintenance, resulting in a lower cost engine that will enable the production of lower cost aircraft.

Turbocharger companies are currently considering using foil bearings, with the NASA Glenn high-temperature coatings, for possible use in automobiles, trucks, and aircraft engines.

This new foil-bearing technology is also having an effect on the power-generation industry. Many onsite gas-powered generators use turbine engines to run the electrical generator. Recent events have generated and increased demand for these independent power sources. While large turbine-based systems rely on traditional oil-lubricated bearing technology, two companies have developed small oil-free turboalternators. These small gas-powered turbine generators are already using foil air bearings in their turbines. Research at NASA Glenn Research Center in developing high-temperature coatings can have a positive effect on these systems and is under consideration. The electrical power output will get a boost from the higher turbine operating temperature of the foil bearings.

NASA Glenn Research Center is a world leader in propulsion and power technology. Research is focused on aerospace industry with spinoffs into other areas. Glenn's leadership role is pushing the frontier of new technology and its application to products that have a positive effect on the world. This work on oil-free turbomachinery typifies Glenn's efforts and will enable a turbomachinery revolution.