Experiment of Physics of Colloids in Space (EXPPCS) 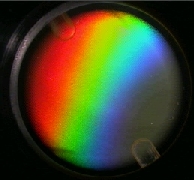 Image left: This is one of the first images from the Physics of Colloids in Space (PCS) on the ISS. During Expedition Two, sample AB6 was illuminated with white light to produce the image. The colored regions result from refraction of the white light by the sample and sample cell, splitting it up into its component colors. Credit: NASA

A colloid is a system of fine particles suspended in a fluid. Paint, milk and ink are some common examples. Though these products are routinely produced and used, scientists still have much to learn about the underlying properties of colloidal systems. Understanding their properties may allow scientists to manipulate the physical structures of colloids - a process called "colloidal engineering" - for the manufacture of new materials and products.

The Physics of Colloids in Space experiment - being conducted during Expedition Two which began with International Space Station Mission 6A (STS-100, April 19, 2001), and will conclude with the return of the samples on flight UF-2 -- is gathering data on the basic physical properties of colloids by studying three different colloid sample types. Scientists hope to better understand how colloid structures grow and behave with the long-term goal of learning how to control their growth to create new materials.

The experiment will focus on the growth and behavior of three different classes of colloid mixtures of tiny manmade particles of either polymethyl methacrylate (PMMA) or silica or polystyrene; these will include samples of binary colloidal crystal alloys, samples of colloid-polymer mixtures and samples of colloidal gels. Binary colloidal crystal alloys are dispersions of two different size particles in a stabilizing fluid. Colloid-polymer mixtures are solutions of mono-disperse particles mixed with a polymer in a stabilizing fluid, where the phase behavior --solid, liquid, and gas-- is controlled by the concentration of the polymer. Colloidal gels include aqueous solutions of particles, in this case aggregated on-orbit with a salt solution, to form fractal structures. The structure, stability and equilibrium properties of all the samples, as well as their structure, dynamics and mechanical properties will be studied.

Results from this investigation will be used for a second phase of the experiment, which will attempt to produce new materials from innovative combinations, including structures with unique physical and optical properties.

The International Space Station crew is taking the colloid samples, mixing each evenly to distribute the suspended particles and then allowing them to sit for several days. During this interval, particles in the samples organize themselves - that is, self-assemble - into crystal-like or gel-like arrangements.

Laser light is being used to gather structural information about the samples. The light is directed at the samples and scatter from the colloid structures, revealing the placement of particles. Additional observations can be made from the ground by monitoring color cameras set up within the PCS experiment hardware.

Measurements are being taken for each sample a few times each week over several months on-orbit. The diagnostic data will provide information on growth, the shape of the structures formed, and other physical properties of the structures.

The experiment are being operated remotely from the NASA Glenn Research Center's Telescience Support Center in Cleveland, Ohio and at an established remote site at Harvard University in Cambridge, Mass. The two locations will permit daily operation of the experiment.

Data will be stored on-orbit on removable hard drives with portions of the data transmitted in real time to ground stations. Complete diagnostic data files can be downlinked at the conclusion of a day's operations when Space Station resources are available. These data will be analyzed to determine the sample growth status and used to evaluate and plan future experiments.

When the experiment is complete, the test samples will be transferred to the Space Shuttle for the return trip to Earth.

The first generation experiments by these investigators in microgravity were Glovebox experiments with binary colloidal crystal alloys and colloid-polymer mixtures, flown on the Russian Space Station Mir and on the Space Shuttle STS-95 mission in October of 1998.

The Glovebox is an enclosed cabinet area that helps maintain a controlled workspace.

The Physics of Colloids in Space hardware is a second-generation instrument. It is based directly on the Physics of Hard Spheres Experiment (PHaSE) instrument hardware assembled and flown on Spacelab in 1997.

The ability to predict a material's characteristics could result in decreased product development time and may lead to more efficient manufacturing.

The Physics of Colloids in Space experiment may lead to new information about the structures of colloidal crystals and help further develop the field of colloidal engineering, making new materials with colloid precursors. These materials may find uses as optical switches and lasers for advanced communications and displays.

Industries using semiconductors, electro-optics, ceramics and composites are among those that may benefit from colloid research.

More information on the Physics of Colloids experiment and other Expedition Two experiments is available at: