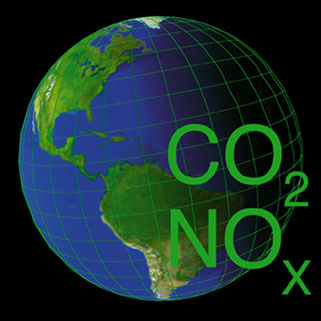 Depletion of the Earth's natural ozone layer and climatic changes affect everyone. These problems are both global and national concerns. How and how much do aircraft emissions affect our environment? These are important issues facing the aircraft industry. The U.S. Clean Air Act regulations and environmentally conscious citizens demand reduced emissions. The International Civil Aviation Organization (ICAO) voices worldwide concern about air quality and climate change.

There are several types of aircraft emissions. Each type has an effect on the environment. If the aircraft industry continues to grow as predicted, reducing these emissions is critical. NASA scientists and engineers are working to reduce aircraft emissions, but the problem is complex.

In order to understand what is being done, we first have to understand some basic concepts. A jet engine is an internal combustion engine, just like an automobile engine is. In a jet engine, the fuel and an oxidizer combust (or burn) and the products of that combustion are exhausted through a narrow opening at high speed. Modern jet engine fuel is primarily kerosene, the same fuel used to heat homes in portions of the U.S. Kerosene, a flammable hydrocarbon oil, is a fossil fuel. Burning fossil fuels primarily produces carbon dioxide (CO2) and water vapor (H2O). Other major emissions are nitric oxide (NO) and nitrogen oxide (NO2), which together are called NOx, sulfur oxides (SO2), and soot.

While atmospheric scientists are still learning about how aircraft engine emissions affect us and our world, researchers at Glenn are leading the efforts to reduce them at their source.

How Warm Is Too Warm?

Greenhouse gases, the greenhouse effect, and global warming are all terms that have been in the news. What do they mean and why are they important? Carbon dioxide in the atmosphere allows the Sun's light rays to pass through to heat the Earth, but it does not allow the heat produced to escape back into the atmosphere. That is known as the greenhouse effect. Naturally occurring CO2 helps keep the Earth warm enough to sustain plant life—warm enough to grow the food we eat. Increased amounts of these greenhouse gases could eventually result in warmer temperatures, melting of the Polar ice caps, rising sea levels, and flooding of coastal areas. Excessive global warming could change the world as we know it.

Aircraft produce up to 4 percent of the annual global CO2 emissions from fossil fuels near the Earth's surface as well as at higher altitudes (25,000 to 50,000 feet). Scientists are still studying the effects of increased amounts of CO2 near the Earth's surface and in the upper atmosphere. Reducing those emissions is the goal of Glenn and its industry and university partners. Just as a car engine that runs efficiently produces less harmful exhaust emissions, the same is true for a jet engine. Incomplete combustion occurs at the lower power settings used for descent or when aircraft are idling or taxiing on the ground. This incomplete combustion results in CO and unburned hydrocarbon emissions that are contributors to local air quality concerns. The same is true when your car engine is idling. The hotter the temperature inside the combustor, the more efficiently the fuel is burned. Unfortunately, these higher temperatures produce increased NOx emissions, so there is a tradeoff. These increased NOx emissions contribute to ozone at cruise altitudes. Improvements in aircraft engine design have already resulted in a 70-percent decrease in CO emissions from their 1976 levels, but more needs to be done to reduce CO2, NOx, unburned hydrocarbons, and CO emissions.

Ozone production and the recent thinning of the ozone layer are other environmental concerns that have been reported on throughout the world. What are they and why are they important? High concentrations of ozone near the surface of the Earth has been linked to respiratory diseases. But there is beneficial ozone. Ozone in the upper atmosphere (about 15 miles up) shields the surface of the Earth from the Sun's ultraviolet radiation. Increasing occurrences of skin cancer are being attributed to the thinning of this protective ozone layer.

Ozone in the upper atmosphere—the ozone layer—is both increased and destroyed by ultraviolet radiation. As long as the amount of ozone created equals what is being destroyed, the ozone level remains the same. Although other factors—the seasons, Sun cycles, winds, and volcanic eruptions—affect ozone levels, there is insurmountable evidence that human activities are disrupting the balance.

Oxides of nitrogen (chemically abbreviated as NOx and pronounced "nocks") increase the production of ozone at typical cruise altitudes of subsonic air travel. These emissions are formed as a result of burning fossil fuels at very high temperatures. Therefore, aircraft emissions containing NOx increase the production of ozone. Aircraft emit significant amounts of NOx when their engines are at their hottest during takeoff and slightly smaller amounts while cruising.

In 1993, a study of toxic emissions at Chicago's Midway Airport revealed that arriving and departing planes released more pollutants than the industrial pollution sources in the surrounding 16-square-mile area. A more recent study at London's Heathrow airport showed that aircraft contributed between 16 and 35 percent of ground level NOx concentrations. 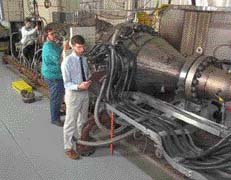 Image right: The Advanced Subsonic Combustion Rig is a state-of-the-art facility for analyzing and fine-tuning the performance of aircraft engine combustors. Credit: NASA


Because of local concerns about the gases exhausted by airplanes, the expansion plans of several U.S. airports—Atlanta, Boston, Chicago, Houston, Los Angeles, New York, Philadelphia, Phoenix, and Washington—have been stopped. Internationally, NOx emission limits set by the ICAO could result in strategies to limit air traffic, such as per flight emissions fees and curfews. Environmental concerns together with the prediction that world air traffic will grow 5 percent annually for the next decade have made reducing aircraft NOx emissions a priority.

How can the temperature inside a jet engine during high-power operation be lowered without jeopardizing the fuel efficiency gains and reduction of other emissions that are achieved with hotter engines? NASA Glenn is investigating new combustion chamber designs with features that lower peak temperatures. 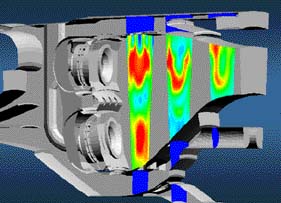 
Computer modeling is used to study how high temperatures and increased emissions are related. Computer predictions of the flow field inside a jet engine combustor can be used to show where high-temperature-NOx-producing regions are located so they can be reduced. This computer model will help find the best design for building and testing an actual combustor. The final result will be an advanced engine for subsonic and supersonic aircraft.

How fuel is injected in an aircraft's engine is important for clean burning. This process is being studied in the laboratory at NASA Glenn; lasers are used to visualize fuel-air flow patterns and make nonintrusive measurements in the combustion zone. Computer modeling and experiments using advanced laser diagnostics will help determine the best design of combustors for application to subsonic and supersonic aircraft.

Low NOx combustors require materials that can withstand high combustion gas temperatures. Glenn researchers developed a new combustor liner, a ceramic matrix composite (CMC) material, which has survived for over 9000 hours at 2200 °F in laboratory tests. Achieving this combustor life was a major durability challenge. When this project began, state-of-the-art CMC had a less than 10-hour life at 1800 °F.


In collaborative efforts, NASA Glenn and its partners have already demonstrated a 50-percent reduction (below the 1996 ICAO baseline) in NOx emissions in combustors for advanced subsonic engines. As a result of research in the 1990's, NOx emissions were reduced by 90 percent compared with today's engines in prototype combustor hardware for supersonic engines. New engines with low-emission combustors entering into service in 2002 will reduce local air quality concerns and enable airports and air traffic to grow and still comply with National Ambient Air Quality Standards.

What Clouds Are Made Of

Both SO2 (which forms sulfate particles) and soot particles from aircraft exhaust are aerosols—microscopic particles suspended in air. They act like seeds. Water molecules can condense or freeze on them to form cloud particles.

Aircraft exhaust produces contrails—condensation trails in the atmosphere about 5 miles above the Earth's surface. At these high altitudes, contrails and cirrus clouds form depending on the quantity of water vapor and atmospheric conditions.

Contrails and cirrus clouds both reflect sunlight that would otherwise warm the Earth's surface. At the same time, they absorb heat from the ground instead of allowing it to escape. Do they contribute to global warming or global cooling? The scientific community is still trying to answer that question.

Contrails contribute to the phenomenon known as "global change." Right now this effect is small, but it is growing. Although scientists are uncertain about the impact of contrails on global change, they believe that persistent contrails, those that last longer than a few minutes, gradually develop into cirrus clouds. Over the past 40 years, cloudiness seems to have increased. If this is in fact true, then this continual increase in cloudiness may lead to global climate change because it will change the amount of radiation entering and leaving the Earth's atmosphere. This characteristic of aircraft engine exhaust may act in a way similar to the effects produced by greenhouse gases.

What effect, if any, do contrails have on weather? Answering this accurately is difficult because so many factors affect weather. However, many meteorologists believe increased jet traffic and the contrails it produces have altered the weather. They point out that areas of high jet traffic show the greatest change. Although circumstantial, evidence seems to indicate that contrails do affect climate. Glenn's contribution of a new generation of highly efficient, clean-burning aircraft engines will reduce the amount of aerosols in the upper atmosphere, which will in turn lessen the effect of increased air traffic on climate.

Advanced concepts being investigated range from aircraft and engines that burn half the amount of fuel used by today's aircraft to designs that don't burn hydrocarbon fuels at all. Converting aircraft propulsion systems to hydrogen fuel and introducing new energy conversion technologies (i.e., air-breathing fuel cells) will eliminate CO2 emissions.

These aircraft of the future will use ultralight-weight materials in the airframe and engine with a fraction of the millions of parts now required. Low-cost, miniature electromechanical sensors will constantly monitor emittants and environmental performance. NASA Glenn is developing high-payoff technologies that will improve engine performance and efficiency and reduce harmful aircraft emissions.

Because of Glenn's significant contributions, the next generation of aircraft, both large and small, will have a minimal impact on air quality and climate. NASA's vision for the future is even brighter. Aircraft emissions of the future will not be harmful. Airports will be environmentally friendly neighbors. Air transportation will grow without any constraints. Smog caused by aircraft emissions will no longer exist. NASA Glenn's researchers are developing technologies today that have the potential to make this "clean" vision a reality.