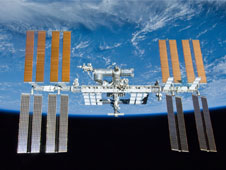 The International Space Station is featured in this image photographed by an STS–132 crew member on the Space Shuttle Atlantis after undocking from the Station May 2010. The space station, including its large solar array, spans the area of a U.S. football field and weighs 827,794 lb. Image credit: NASA What's in a Space Power System?
Electrical power is the most critical resource for the International Space Station because it allows the crew to live comfortably, to safely operate the station and to perform scientific experiments. Whether it is used to power the life support system, run a furnace that makes crystals, manage a computerized data network or operate a centrifuge, electricity is essential. Since the only readily available source of energy for spacecraft is sunlight, NASA's Glenn Research Center in Cleveland has pioneered, and continues to develop, technologies to efficiently convert solar energy to electrical power. One method of harnessing this energy, called photovoltaics, uses purified silicon solar cells to directly convert light to electricity. Large numbers of cells are assembled in arrays to produce high power levels.

A spacecraft orbiting the Earth,however,is not always in direct sunlight. Therefore, the space station relies on nickel-hydrogen rechargeable batteries to provide continuous power during the eclipse part of the orbit. The batteries ensure that the station is never without power to sustain life support systems and experiments. During the sunlit part of the orbit, the batteries are recharged.

The process of collecting sunlight, converting it to electricity and managing and distributing this electricity builds up excess heat that can damage spacecraft equipment. This heat must be eliminated for reliable operation of the space station in orbit. The station's power system uses radiators to direct the heat away from the spacecraft. The radiators are shaded from sunlight and aligned toward the cold void of deep space.

The power management and distribution subsystem disburses power at 160 volts of direct current (abbreviated as "dc") around the station through a series of switches. These switches have built-in microprocessors that are controlled by software and are connected to a computer network running throughout the station. To meet operational requirements, dc-to-dc converter units step down and condition the voltage from 160 to 120 volts dc to form a secondary power system to service the loads. The converters also isolate the secondary system from the primary system and maintain uniform power quality throughout the station.

Performance Analyses
The System Power Analysis for Capability Evaluation (SPACE) computer code was developed as a tool to predict the maximum power level that the station power system could produce and sustain throughout the sunlight and shade portions of a specific orbit. The code includes mathematical models of the solar array, batteries and power management and distribution equipment. Using SPACE, Glenn supports the space station program by answering questions such as: A detailed mission profile is constructed and assessed with the SPACE code to ensure that the power system design can support the planned mission.

Array Design
The space station's electrical power system uses eight photovoltaic solar arrays to convert sunlight to electricity. Each of the eight solar arrays is 112 feet long by 39 feet wide. With all eight arrays installed, the complete space station is large enough to cover a football field. Because the space station needs very high power levels, the solar arrays require more than 250,000 silicon solar cells. NASA developed a method of mounting the solar arrays on a "blanket" that could be folded like an accordion for delivery to space. Once in orbit, ground controllers sent commands to deploy the blankets to their full size. Gimbals are used to rotate the arrays so that they face the sun to provide maximum power to the space station.

The complete power system, consisting of U.S. and Russian hardware, generates 110 kilowatts (kW) total power, about as much as 55 houses would typically use. Approximately 30 kW are available for research activities.

Hardware Development
Glenn's expertise and facilities were used in the development and testing of the electrical power system and its components. The electronics were evaluated in the EPS testbed, and gimbal testing was performed to demonstrate that the gimbal design met the electrical performance and lifetime requirements. Glenn also coordinated and participated in testing early assembly operations for the space station power system hardware in a special pool dubbed a Neutral Buoyancy Simulator, which was located at NASA's Marshall Space Flight Center in Huntsville, Ala. The procedures used to assemble the power system were tested underwater by attaching weights to divers and equipment so they neither sank nor floated, thus providing a realistic simulation of working in space. Glenn engineers suited up as divers and tested equipment designs and tool use and worked through portions of actual mission timelines that would be followed to assemble the power system components in space. More recent assembly operations were tested using the Weightless Environmental Training Facility at NASA's Johnson Space Center in Houston. 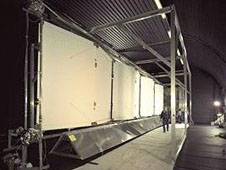 Radiator testing in the Space Power Facility at NASA's Plum Brook Station in Sandusky, Ohio. Image credit: NASA
A team of Glenn engineers and technicians also designed and built four small versions of the more than 100-foot-long space station solar array, a Solar Array Electrical Simulator (SAES) about the size of a large walk-in closet. The SAES is used to test other power system flight hardware.

Glenn expertise continues to be used extensively throughout the station power system for components such as switches and converter units. Glenn led the design and development of all EPS hardware early in the space station program. Because of this comprehensive background, Johnson asked Glenn to oversee and manage the development, testing and operations of EPS flight hardware and spares, as well as to coordinate all international EPS-related interfaces. This effort includes monitoring tests and inspecting hardware at multiple subcontractor sites where the hardware is manufactured, at NASA Kennedy Space Center, Fla., and at Tsukuba, Japan, prior to launch. In addition, Glenn supports the Mission Evaluation Room at Johnson during missions that perform new and unique EPS operations, such as battery replacement and reconditioning.

Keeping Cool
The space station radiator system maintains the temperatures of systems and components. It was tested at the Space Power Facility (SPF) at NASA's Plum Brook Station in Sandusky, Ohio. This facility is the world's largest space environment simulation chamber (100 feet in diameter by 122 feet in height) and is used to ground test large space-bound hardware. It can simulate the severe conditions of space such as vacuum, low temperatures and unfiltered sunlight.

The radiator system consists of seven panels (each about 6 by 12 feet) designed to deploy in orbit from a 2-foot-high stowed position to a 50-foot-long extended position. The first round of tests confirmed that the deployment mechanism would operate properly in the cold void of space. The next phase of tests used a Glenn designed and assembled ammonia flow system to evaluate radiator performance. The ammonia collects heat from the space station's electronic equipment and module cooling components and transfers it to the radiator panels to be dissipated into space. Ammonia was selected because it was found to be the best heat transport fluid that meets all of NASA's thermal performance and safety requirements (toxicity, flammability, freeze temperature, stability, cost and successful commercial and industrial use). Glenn also assisted in the development of the procedures for the successful ammonia refill operations on the space station in May 2011.

"Batteries Included"
The station is in an orbit with an altitude of 250 statute miles with an inclination of 51.6°. As the station travels, Earth will shadow the space station solar arrays from the sun for up to 36 minutes of each 92-minute orbit. To avoid an interruption in the power supply, Glenn developed rechargeable nickel-hydrogen batteries that can store electrical energy gathered during the sunlit portion of the orbit and discharge electrical energy for use during the eclipse portion.

Thirty-eight cells are packaged together in series with monitoring instrumentation (temperature and pressure) inside an enclosure called an Orbital Replacement Unit (ORU). The enclosure is designed to allow simple ORU removal and replacement by astronauts while in orbit. Since the station will never return to the ground, all repairs must be made in orbit. The batteries are not the only ORUs on the station; in fact, every item of space station hardware that will require maintenance or replacement has been designed as an ORU. The original set of batteries lasted almost 10 years (50,000 charge/discharge cycles) prior to replacement.

Glenn is also involved in the development of the next generation of space station batteries. As the existing nickel-hydrogen batteries continue to operate in orbit, they are expected to require replacements starting in 2017. The new batteries will be made using lithium-ion cells. Due to the higher specific energy of the lithium-ion chemistry, one lithium-ion ORU will replace two nickel-hydrogen ORUs while still providing the same amount of power. 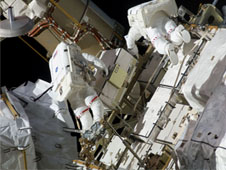 Plasma Contactor
The space station arrays operate at 160 volts dc. When the arrays are producing power, the station structure will also tend to float to a voltage close to the array voltage. Under these conditions, the space station could be subjected to problems like arcing from its surface to the surrounding environment, or arcing to an astronaut. To avoid these problems, the structure has been grounded with a Plasma Contactor Unit (PCU). To protect the astronauts from shock hazards, the PCU is operated during all spacewalks. 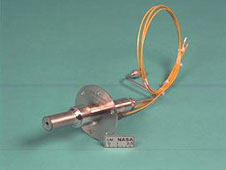 This photo is of the Hollow Cathode Assembly, which is installed in the plasma contactor that will protect the structure of the space station. Image credit: NASA
The PCU acts as an electrical ground rod to connect the space station structure to the local environment and harmlessly dissipate the structure charges. Glenn engineers designed, manufactured, tested and installed the hollow cathode assembly, which is the critical component of the PCU. The Hollow Cathode Assembly performs this func¬tion by converting a small supply of gas into ions and electrons and discharging this stream to space. The stream carries with it the excess electrons that created the surface charge.

A Bright Future
At the dawn of this new era of discovery, Glenn continues its vital role of powering future space missions. As people from around the world continue their exploration and development of space aboard the space station, they will rely upon the Glenn-designed power system to harness the sun's energy. Even as researchers at Glenn monitor the performance of this system, they will be working to address the challenges of future space exploration missions.