Small Aircraft Propulsion: The Future Is Here
Glenn Propulsion Program Opens the Door to a New Era in General Aviation


NASA's General Aviation Propulsion (GAP) program has turned vision into reality. At the beginning of the GAP program, NASA promised to transform small aircraft by developing revolutionary new engines and demonstrating them in the year 2000. These radically advanced engines will enable the general aviation industry to produce innovative, affordable engines for the commercial market. 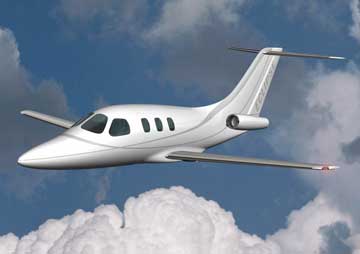 Although current general aviation engines are good and have served their purpose well, they require considerable pilot attention, intrude on passenger comfort with noise and vibration, and are costly to buy, operate, and maintain.

Image right: The Eclipse 500TM, a six-passenger jet made possible by revolutionary EJ22 turbofans, which are commercial derivatives of the GAP FJX-2 turbofan. Credit: NASA

The new GAP engines will change all of that, along with our ideas about what general aviation propulsion systems can be. With their smooth, quiet operation, they provide comfort never before enjoyed in general aviation light aircraft. New engines are crucial to truly new airplane designs. The GAP engines are bringing about a revolution in light aircraft affordability, ease of use, and performance.

These new engines are key to creating a small aircraft transportation system in the United States. The potential is especially strong when the benefits of the new propulsion systems are coupled with those of cockpit and airframe technologies developed by the NASA-FAA-industry Advanced General Aviation Transport Experiment (AGATE) consortium.

The jet-fueled GAP diesel engine will make possible outstanding new propulsion systems for entry-level aircraft. Such aircraft are usually characterized by a single engine, up to four seats, cruise speeds of 200 knots or less, and easy, well-mannered handling.

The GAP program goal for piston engines was to reduce engine prices by half while eliminating the need for leaded gasoline and substantially improving reliability, maintainability, ease of use, and passenger comfort. To achieve this goal, Teledyne Continental Motors and it's industry team (Aerosance, Cirrus Design, Hartzell Propeller, Lancair, and Mod Works) partnered with NASA Glenn to develop a highly advanced piston engine, the GAP diesel engine. Diesel engines are known for being reliable but have been considered too heavy for use in general aviation. Combining the two-stroke operating cycle with innovative, lightweight construction makes the GAP diesel engine competitive with current piston aircraft engines. 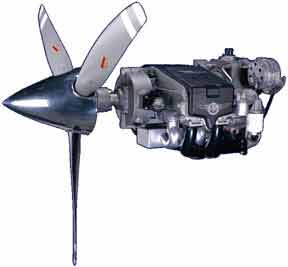 The GAP diesel engine, combined with advanced-design low-speed propellers (from related NASA-industry research), offers very quiet operation for both passengers and airport neighbors. Additionally, the new engine is very economical to operate. It has been designed to burn readily available jet fuel at a low fuel consumption rate of about 25 percent less than current engines.

This engine provides pilots and passengers with the same kind of quiet, easy-to-use power that we have come to expect in our automobiles. There is no fuel-air mixture or propeller pitch control for pilots to contend with. A single power lever controls the engine and propeller automatically, much like the gas pedal of a car with an automatic transmission. Other special design features ensure extremely smooth, vibration-free operation. And because the GAP diesel's unique design allows use of low-cost mass production manufacturing methods, engine cost could be half that of current aircraft piston engines.

Modern turbine engines are highly desirable aircraft propulsion systems because they are user-friendly and environmentally compliant. They are characterized by very high reliability, smooth operation, use of readily available jet fuel, and low noise and emissions. Their reliability and smoothness contribute greatly to aircraft safety and comfort. But, until now, the use of turbine engines in the light aircraft market has been limited by high cost. 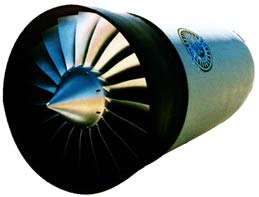 With the development of the FJX-2 Turbofan engine, the GAP program is helping to reduce the cost of small turbine engines by a factor of ten and revolutionize the concept of personal air transportation. The FJX-2 has enabled a whole new class of aircraft: safe, affordable, fast, efficient small jets in which the family can travel in comfort. At a fraction of the cost, this new turbine engine has made the performance of a commercial jet available to the general aviation community, including cruise speeds of 380 knots (440 mph) and the ability to fly over or around inclement weather.

The FJX-2 is a high-bypass-ratio turbofan engine that produces 700 pounds of thrust, yet weighs only 85-100 pounds, about one-fourth the weight of piston engine propulsion systems with similar capabilities. To keep costs low, the FJX-2 team applied many lessons learned from research of automotive gas turbine engines. Emphasis was placed on simplifying design and reducing the number of parts. Low-cost design techniques and advanced automated manufacturing methods have led to the first turbine engine that is cost competitive with piston engines. While not as fuel efficient as today's comparable piston-powered aircraft, new turbofan jets will have equivalent or lower takeoff-to-landing fuel consumption.

The Future Is Here

The General Aviation Propulsion Program has delivered on its promise to propel the general aviation industry to new heights. Commercial derivatives of the GAP diesel engine and the FJX-2 turbofan engine will provide a previously unheard-of level of comfort and convenience, and the performance-to-price ratio will soar. The Eclipse 500TM aircraft, made possible by the revolutionary EJ22 turbofan (a commercial derivative of the GAP FJX-2), is just the first example of a new generation of aircraft. 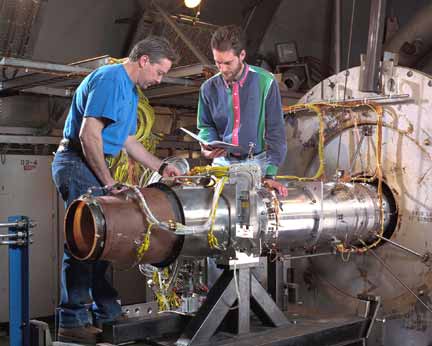 NASA, with its government and industry partners, is putting America on wings!