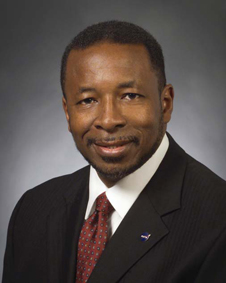 Dr. Woodrow Whitlow Jr. is Director of the National Aeronautics and Space Administration (NASA) John H. Glenn Research Center at Lewis Field in Cleveland, Ohio. Appointed to this position effective December 25, 2005, he is responsible for planning, organizing and directing the activities required to accomplish the missions assigned to the center.

While managing an annual budget of approximately $500 million, he oversees a workforce of approximately 1,680 civil service employees that is supported by approximately 1,580 contractors. The center has 24 major facilities and over 500 specialized research facilities located at the 350-acre Cleveland site and the 6,400-acre Plum Brook Station site in Sandusky, Ohio.

From September 2003 through December 2005, Dr. Whitlow served as the Deputy Director of the NASA John F. Kennedy Space Center. There his duties included assisting the director in determining and implementing center policy and in managing and implementing the center's missions and agency program responsibilities in the areas of processing, launch, and recovery of launch vehicles; processing of spacecraft; and acquisition of launch services. Prior to this appointment as Deputy Director, he served as the Director of Research and Technology at the Glenn Research Center.

Dr. Whitlow began his professional career in 1979 as a research scientist at the NASA Langley Research Center, Hampton, Virginia. He assumed various positions of increasing responsibility before moving to the Glenn Research Center in 1998. In 1994, he served as Director of the Critical Technologies Division, Office of Aeronautics, at NASA Headquarters.

Dr. Whitlow earned his Bachelor of Science, Master of Science and Doctor of Philosophy degrees in Aeronautics and Astronautics from the Massachusetts Institute of Technology. He has written nearly 40 technical papers, most in the areas of unsteady transonic flow and aeroelasticity.

Dr. Whitlow and his wife have two daughters and two granddaughters.