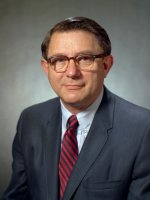 Dr. Abe Silverstein, retired Director of NASA's Lewis Research Center, Cleveland, Ohio, is a native of Terre Haute, Indiana. In 1929 he earned the degree of Bachelor of Science in Mechanical Engineering at Rose Polytechnic Institute, and in 1934 he received a Mechanical Engineering Professional degree from the same school.

Dr. Silverstein began his scientific career with the National Advisory Committee for Aeronautics in 1929 at the Langley Research Center. There he helped design and later was placed in charge of the Full-Scale Wind Tunnel. In this facility he directed important aerodynamic research which led to increased high-speed performance of most of the combat aircraft of World War II.

In 1943 he was transferred to the Lewis Laboratory at Cleveland. As Chief of the Wind Tunnel and Flight Division, he directed research in propulsion aerodynamics in the Altitude Wind Tunnel. These investigations led to significant improvements in both reciprocation and early turbojet aircraft engines. He also pioneered research on large-scale ramjet engines.

Following World War II, Dr. Silverstein was responsible for the conception, design, and construction of our nation's first supersonic propulsion wind tunnels. The investigations in these facilities greatly contributed to the development of our present day supersonic aircraft.

Dr. Silverstein was placed in charge of all research at the Lewis Research Center in 1949, and in 1952 he was appointed Associate Director of the Lewis Laboratory.

In May 1958, Dr. Silverstein transferred to NACA Headquarters in Washington to help plan the organization and programs of the NASA, subsequently becoming Director of NASA's Office of Space Flight Programs in October 1958. He directed those NASA programs concerned with mission planning, spacecraft design and development, and in-flight research and operation. Development programs under his direction included space probes and manned and unmanned satellite systems.

Dr. Silverstein returned to Cleveland in November 1961 to take the helm of the Lewis Research Center as its Director. He retired in October 1969. He presently is Director of Environmental Planning, Republic Steel Corporation, Cleveland, Ohio. He is also serving as Technical Advisor for the Lake Erie International Jetport Task Force.

Dr. Silverstein was American representative to the Joint Meeting of the Institute of the Aeronautical Sciences and the Royal Aeronautical Society in London in 1947; delivered the annual Wright Brothers Lecture before the Institute of Aeronautical Sciences in 1948; delivered the 49th Wilbur Wright Memorial Lecture in London in 1961; presented a paper to the International Council of the Aeronautical Sciences Fifth Congress in London in 1966; and delivered the Biennial Theodore Von Karman Memorial Lecture at the Tenth Israel Annual Conference on Aviation and Astronautics in Tel Aviv, Israel, in 1968. He was awarded an honorary Engineering Degree by Case Institute of Technology in 1958, and honorary doctor of Science Degree by Rose Polytechnic Institute in 1959, and honorary Doctor of Humane Letters Degree by Yeshiva University in 1960, and honorary Doctor of Applied Science Degree by John Carroll University in 1967. He was presented the Air Force Exceptional Civilian Service Award in 1960, the NASA Medal for Outstanding Leadership in 1961, the National Civil Service League's Career Service Aware in 1962, the Sylvanus Albert Reed Award of the American Institute of Aeronautics and Astronautics in 1964, the Louis W. Hill Space Transportation Award of the AIAA in 1967, and the Boy Scout Silver Beaver Award, NASA Distinguished Service Medal, and Rockefeller Public Service Award in 1968.

Notes:
› Back To Top