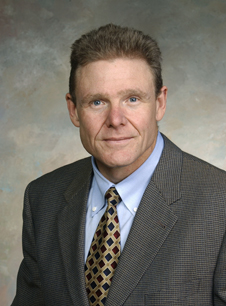 Dr. George R. Schmidt is Deputy Director of the Research and Technology Directorate at the National Aeronautics and Space Administration’s John H. Glenn Research Center at Lewis Field in Cleveland, Ohio. Appointed to this position in March 2007, the organization is responsible for planning, advocating, coordinating, organizing, directing and supervising all phases of directorate research and business activities to meet NASA mission commitments.

Prior to his current assignment, Dr. Schmidt served as Manager of the Propulsion Research Center at NASA’s Marshall Space Flight Center in Huntsville, Ala., where he led a variety of cutting-edge research projects covering a broad range of advanced propulsion technologies. He also served as Deputy Manager of Marshall’s Test Laboratory, where he assisted in directing activities of approximately 300 NASA and contractor employees and the operation of 40 experimental facilities.

Dr. Schmidt started his NASA career by leading research and technology projects focused on cryogenic fluid management. He held positions of increasing responsibility in Marshall’s engineering organizations and spent two years at NASA Headquarters serving as the Program Executive for Nuclear Power Systems. Prior to joining NASA, he worked at Booz Allen Hamilton supporting system engineering activities for the International Space Station and at Boeing Aerospace as a propulsion system analyst and designer.

Dr. Schmidt holds Bachelor of Science and Master of Science degrees in Mechanical Engineering from Stanford University and a Master of Science degree in Aeronautics and Astronautics from the University of Washington. He also holds a Doctor of Philosophy degree in Mechanical Engineering from the University of Alabama in Huntsville, where he was an adjunct professor and taught a course in advanced propulsion. He is a member of the American Institute of Aeronautics and Astronautics (AIAA) and has served on several of its technical committees, including chairing the Nuclear and Future Flight Propulsion Technical Committee.

Dr. Schmidt has received a patent and is the author of over 70 publications, including 14 refereed publications, in the areas of space propulsion, cryogenic and microgravity fluid mechanics, and nuclear power and advanced high-energy propulsion. His awards include AIAA’s Holger Toftoy Award for outstanding technical management, the University of Alabama College of Engineering Distinguished Alumni, the American Nuclear Society Best Paper Award and nearly two-dozen NASA awards.