Grow Text SizeShrink Text Size
Revolutionary Atmosphere
Since its founding in 1941, NASA's Glenn Research Center in Cleveland has made invaluable contributions to aeronautics and space flight. New aircraft technology has been developed, tested, designed and fabricated at Glenn. And for much of Glenn's history, the testing of cutting-edge technology took place in the Altitude Wind Tunnel. 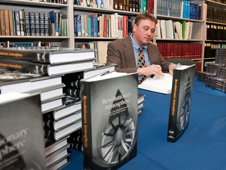 Bob Arrighi (Wyle Information Systems LLC), the archivist at NASA's Glenn Research Center, has written a new book on Glenn's Altitude Wind Tunnel and Space Power Chambers called "Revolutionary Atmosphere."
Image Credit: NASA
The Altitude Wind Tunnel, or AWT, was built in Cleveland in 1944. The huge structure, which could accommodate a full-sized airplane within the tunnel, was the first of its kind to accurately simulate a variety of realistic flight conditions. Researchers could investigate the effects of high speeds and varying pressures, temperatures and elevations on aircraft by using this tunnel.

During its existence, the AWT played pivotal roles in myriad projects, from early astronaut training in Project Mercury to testing the Centaur rocket. It ceased operations in the 1970s and was demolished in 2009.

Although the tunnel itself is now gone, the lessons learned in the tunnel remain. And there are stories from the tunnel to be told.

Bob Arrighi (Wyle Information Systems LLC) is the archivist for Glenn. His job is to archive, document and present to the public the rich history of Glenn. When the Altitude Wind Tunnel (AWT) was demolished in 2009, he was tasked with telling the tunnel's story. He has written a book, called "Revolutionary Atmosphere: The Story of the Altitude Wind Tunnel and the Space Power Chambers." Accompanying this book is a DVD, "A Tunnel Through Time: The History of NASA's Altitude Wind Tunnel." There is also a website that explores the history of the AWT. A complete online version of the book "Revolutionary Atmosphere" is available.

The tales of the tunnel can, quite literally, fill a book. Bob Arrighi gives us a preview into the book and shares a bit about his background, how the project came to be, what the process of writing the book was like, and why the topic is relevant today. 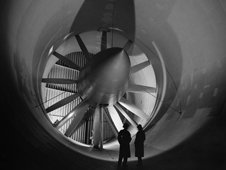 The Altitude Wind Tunnel was built in 1944. This image, taken in that year, shows the 31-foot diameter wooden fan featured in the tunnel.
Image Credit: NASA.
View Related Image Gallery
Q: What does your job entail?
Bob Arrighi: I maintain a collection of documents and other media related to the history of NASA's Glenn Research Center. I assist researchers with reference requests and in-depth research. I also identify or am assigned noteworthy historical topics and asked to document them by creating publications, websites, documentaries and multimedia pieces.

Q: How long have you been at Glenn?
Arrighi: I started at in July 2001 as a contractor for the Plum Brook Reactor Facility documentation effort. In July 2003 I assumed my current position in the Glenn History Office. Since May 2005, my time has been divided between working on documentation of the Altitude Wind Tunnel (AWT), Propulsion Systems Laboratory and other facilities for the Glenn Historic Preservation Officer and my continuing role in the History Office. 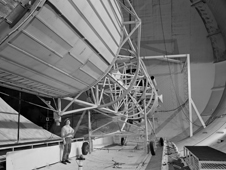 In the 1960s, the Space Power Chamber was a testing facility for rockets. This image, taken in 1963, shows a mockup of Atlas/Centaur undergoing retrorocket testing.
Image Credit: NASA
Past projects have included the Plum Brook Reactor Facility and Rocket Engine Test Facility. In both cases, an outside company was hired to perform the documentation. Books, documentaries, a website and other materials were created. When outlining the efforts undertaken to fulfill the mitigation for the Altitude Wind Tunnel (AWT) and Propulsion Systems Laboratory, the work on Plum Brook Reactor Facility and Rocket Engine Test Facility served as a template. A number of products were requested. These products, created in-house, included a website, documentary, a historic engineering report and a book.

Q: What was the timeline for creating the book?
Arrighi: I started the general AWT research during the summer of 2005. A big push on the manuscript came in the summer and fall of 2007. The manuscript was submitted to NASA Headquarters in Washington for peer review in September 2008. Editing and layout were conducted throughout 2009. We received copies in June 2010.

Q: Describe the process of writing this book.
Arrighi: As I started the research, I kept an ongoing narrative of information that was used for many of the different products. As the research became more complete and some of the other products had been created, I began converting this narrative into a story by integrating quotes from interviews, photographs and anecdotes from articles, and creating chapters and sidebars. I repeatedly reviewed and rewrote the text to make it more interesting and easier to grasp. After incorporating comments from the peer reviewers, I began working with Nancy O'Bryan (Wyle Information Systems LLC) and Kelly Shankland (Wyle Information Systems LLC) in the Publishing Department at Glenn. We worked on editing the text and laying out the chapters. This process, which included creating the index, formatting the citations and working on the cover art, took about a year to complete.

Q: Describe what the book is about.
Arrighi: The book tells the history of the Altitude Wind Tunnel, or AWT. For years, the AWT was not only Glenn's premier facility, but also the only tunnel in the country that could test engines in altitude conditions. In the late 1950s it was modified so that its interior could be used for several altitude tests and astronaut training for Project Mercury. In 1961 the facility was converted into two large test chambers and used for numerous different types of tests for the Centaur second-stage rocket. The facility was closed in the mid-1970s. A bid to restore the facility to its original wind tunnel function in the early 1980s failed. The tunnel was eventually demolished in 2009. 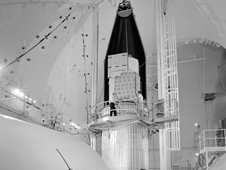 The Orbiting Astronomical Observatory is assembled in the Space Power Chamber at Glenn, in 1965.
Image Credit: NASA
Q: Why did you think it was important to write this book?
Arrighi: Glenn has a rich history that includes many significant accomplishments and a high level of technical expertise. The AWT story provides insight into the center's history from its very inception through the turbojet revolution, to the early manned space program and into recent years. The AWT demonstrates the significance of modifying a facility to stay relevant, the importance of the center's technical staff and the accomplishments of Abe Silverstein, a former Glenn center director who was very instrumental in the creation of NACA and NASA wind tunnels.

Q: How is the subject material of your book relevant to the general public?
Arrighi: Although it is impossible to write a book about a wind tunnel without getting into some technical detail, I tried to focus on the staff who were involved, and what was happening contextually. The AWT story presents many of the center's accomplishments to the public, many which have never been shared before.

Q: What is one of the most interesting things in the book?
Arrighi: I learned a tremendous amount about NACA, Glenn, jet engines, liquid hydrogen, and many other topics. Probably the most rewarding aspect was talking with or reading interview transcripts from former employees. These fill the cracks that reports, newspaper articles and other sources leave open. In almost every case, two themes arose in these interviews: the importance and skill of the mechanics and technicians and Abe Silverstein's role in guiding the center and agency for decades.

Read the Book, Watch the DVD

There are several ways to purchase a printed copy of "Revolutionary Atmosphere: The Story of the Altitude Wind Tunnel and the Space Power Chambers."

To acquire a copy of the DVD "A Tunnel Through Time: The History of NASA's Altitude Wind Tunnel" please email the NASA Glenn History Office