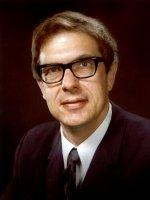 A native of Brooklyn, New York, Dr. Lubarsky presently resides in Berea, Ohio with his wife, Susan. They have two sons, Rusty and Martin.

Notes:
› Back To Top