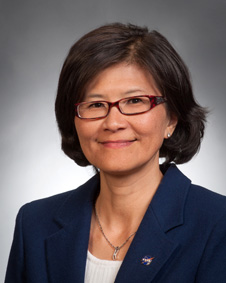 Dr. Jih-Fen Lei is Director of the Research and Technology Directorate at the National Aeronautics and Space Administration (NASA) John H. Glenn Research Center at Lewis Field in Cleveland, Ohio. She is responsible for planning, advocating, coordinating, organizing, directing, and supervising all phases of directorate research and business activities. The directorate consists of more than 470 civil service employees and about 250 onsite support service contractors, who conduct advanced research and technology development in propulsion, power, communication, high-temperature materials and structures, microgravity science, instrumentation and controls, nanotechnology and biotechnology to meet NASA mission commitments.

Dr. Lei earned her Bachelor of Physics degree from National Tsing-Hwa University and her Doctorate in Material Science and Engineering from Northwestern University. She is a graduate of the Senior Executive Service (SES) Candidate Development Program, during which she worked in the Office of the Chief Scientist and the Office of Biological and Physical Research at NASA Headquarters, as well as at the U.S. Office of Science and Technology Policy (Executive Office of the President). In addition, Dr. Lei is a graduate of Harvard University's John F. Kennedy School of Government program "Senior Managers in Government," the Brookings Institution's public policy program "Executive Leadership in a Changing Environment" and Stanford University's executive program "Leading Change and Organizational Renewal."

Dr. Lei has received numerous awards, including the Meritorious Presidential Rank Award in 2007, the NASA Equal Employment Opportunity Honor Medal in 2007, the NASA Public Service Honor Medal in 1996, the prestigious R&D 100 Award in 1991, 1995 and 1998, the Army Research Laboratory Honorary Medal for Technical Achievement in 1997, the Women of Color Technology Innovation in Government Award in 2000, NASA Group Achievement Awards in 2004 and 2005, and the NASA Turning Goals Into Reality Award in 2000, 2002 and 2004.

Dr. Lei is an accomplished researcher; she has written over 98 technical publications and has given over 60 talks, including panel discussions, plenary speeches and 20 invited presentations. She also is patented in her field.

Originally from Taiwan, Dr. Lei and her husband live in Westlake, Ohio.