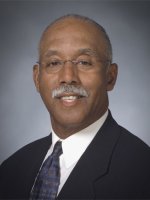 Dr. Julian M. Earls is Director of the National Aeronautics and Space Administration's Glenn Research Center at Lewis Field in Cleveland, Ohio. He was appointed to this position effective October 1, 2003. Previously he served as Glenn's Deputy Director. As Director, Dr. Earls is responsible for planning, organizing, and directing the activities required to accomplish the missions assigned to the Center. Glenn is engaged in research, technology and systems development programs in aeronautical propulsion, space propulsion, space power, space communications, and microgravity sciences in combustion and fluid physics.

While managing an annual budget of approximately $773 million, he oversees a workforce of 1,920 civil service employees and 1,300 on-site support service contractors. The center consists of 24 major facilities and over 500 specialized research facilities located at the 350-acre Cleveland site, near Cleveland Hopkins International Airport, and the 6,400-acre Plum Brook Station in Sandusky, Ohio.

Since beginning his career with NASA in 1965 at the Lewis Research Center, renamed to the Glenn Research Center in 1999, Dr. Earls has written 28 publications for technical and educational journals. He wrote the first health physics guides used at NASA. He has been a Distinguished Honors Visiting Professor at numerous universities throughout the Nation. On two occasions, he has been awarded NASA medals for exceptional achievement and outstanding leadership. Also, he has received the Presidential Rank Award of Meritorious Executive.

He is an avid runner who has run over 10,000 miles in the past 5 years. He has completed 25 marathons, including the Boston Marathon. Dr. Earls was honored to be selected a Torchbearer for the Salt Lake 2002 Winter Olympic Games. He carried the Olympic Flame for a segment of the Olympic Torch Run through Cleveland, Ohio, on January 1, 2002. Dr. Earls and his wife, Zenobia, reside in Beachwood, Ohio. They have two sons, Gregory and Julian, Jr., and one granddaughter, Madisyn Chandler.