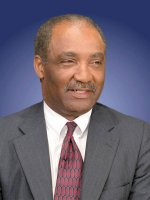 Donald J. Campbell is Director of the National Aeronautics and Space Administration's Glenn Research Center at Lewis Field in Cleveland, Ohio. NASA Administrator Daniel Goldin appointed him to this position on January 6, 1994.

As Director, Campbell is responsible for planning, organizing, and directing the activities required in accomplishing the missions assigned to the Center. Glenn is engaged in research, technology, and systems development programs in aeronautical propulsion, space propulsion, space power, space communications, and microgravity sciences in combustion and fluid physics.

While managing an annual budget of approximately $650 million, he oversees a workforce of 1900 civil service employees and 1500 on-site support service contractors. The center consists of 24 major facilities and over 500 specialized research facilities located at the 350-acre Cleveland site, near Cleveland Hopkins International Airport, and the 6400-acre Plum Brook Station in Sandusky, Ohio.

He also has completed the Senior Executive Seminar in Management at Carnegie Mellon School of Urban and Public Affairs and the Executive Leadership Program at the Federal Executive Institute. In addition, he has studied at the Brookings Institute and Defense Systems Management School.

Campbell began his government career in 1960 as a test engineer for gas turbine engines and engine components in the Air Force Aero Propulsion Laboratory, Wright-Patterson Air Force Base, Ohio. He then worked as a researcher, a project engineer and later as a program manager for advanced air breathing propulsion systems. Following these engineering positions, he served as senior planning manager for gas turbine engines on staff to Laboratory Commander.

From February to July 1986, Campbell was assigned as an interim Directorate Chief during the implementation of the National Aerospace Plane (NASP) Program Office, Wright-Patterson Air Force Base. He was Acting Director of the NASP Technology Maturation Directorate. In 1987, he became Acting Deputy director of the Aero Propulsion Laboratory. In 1988, he was selected for the rank of Senior Executive Service and was appointed Deputy Program Director for the Propulsion System Program Office, Aeronautical Systems Division. He was the senior civilian executive for development and acquisition of new and derivative gas turbine engines for operational aircraft. In 1990, he was appointed Director of the Aero Propulsion and Power Laboratory. He was responsible for the Air Force propulsion and power research and development in the areas of gas turbine engines, ramjet engines, aerospace power systems, and fuels and lubricants.

The superior quality of his work over almost four decades has been recognized with the Air Force Systems Command Certificate of Merit, the Meritorious Civilian Service Award, and the Presidential Rank Award of Meritorious Executive in the Senior Executive Service. He also received the Affirmative Action Award from the Ohio Dr. Martin Luther King, Jr. Holiday Commission and was named the 1998 Federal Laboratory Director of the Year for Technology Transfer by the Federal Laboratory Consortium. Campbell was recently recognized with the Technical Excellence in Government and Engineer of the Year Award from the National Technical Association. In addition, he was presented the Career Achievement Award by the 2001 Black Engineer of the Year Awards.

A native of Lima, Ohio, he was inducted into the Lima City Schools Hall of Fame in 1993. Campbell and his wife, Helen, have four adult children.