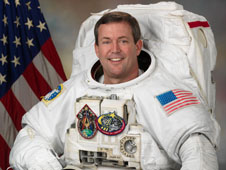 Astronaut Michael Foreman has flown two shuttle missions: STS-123 in March 2008 and STS-129 in November 2009. Image Credit: NASA Of the twenty-four astronauts that Ohio is proud to claim as its own, only one has worked at NASA's Glenn Research Center in Cleveland, Ohio—none other than Neil Armstrong, who worked at NACA's Lewis Laboratory (now Glenn Research Center) before becoming an astronaut. But as of this past June, Armstrong is no longer the only one. Michael Foreman, a shuttle astronaut who was born in Wadsworth, Ohio, joined Glenn as the Chief of External Programs.

The first active astronaut to work at Glenn, Foreman is currently serving a one-year detail. While at Glenn, he will still perform his outreach and education duties through the astronaut office at NASA's Johnson Space Center in Houston. He is excited to return to the Cleveland area—near his mother and many other relatives—as well as for the work to be done at Glenn.

Foreman, who is an engineer in addition to a pilot and astronaut, has extensive experience working with scientists, researchers and engineers to offer a crew perspective on procedures and equipment for the space program. He also is accustomed to public speaking through his appearances as an astronaut, so the education, outreach and communications contained in the External Programs division appeal to him.

Center Director Ramon "Ray" Lugo put a call out for a member of the Astronaut Corps to join the Glenn team earlier this year.

"I brought Mike [Foreman] to Glenn for a number of reasons. First, he is an Ohio astronaut, and I believe Mike represents the possibilities of life. Pursue an education, and anything is possible. I believe Mike will help us increase NASA's visibility in the community, and inspire local children to pursue a technical education," Lugo says.

Foreman believes that his service as an astronaut will be beneficial to his leadership role at Glenn. He says it may open some doors to help even more people learn what Glenn and NASA are all about. It will also enable him to increase his outreach efforts, including speaking to local and regional groups, especially school children.

"It's always been a popular place for me to come as an astronaut to speak, since I'm from here, and now I can do even more of that since I'm right here, all the time," Foreman says. 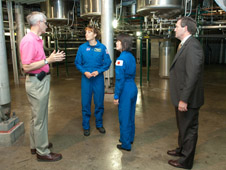 David L. Stringer, Director of Glenn’s Plum Brook Management Office, and Michael Foreman, Chief of External Affairs, give a tour of Plum Brook to members of the STS-131 crew. From left to right, the crewmembers are Dorothy Metcalf-Lindenburger and Naoko Yamazaki. Image Credit: NASA

He will be traveling around the region, including Ohio and surrounding states, to share the NASA message. He'll continue to make some appearances around the country, upon occasion, especially in support of the Summer of Innovation.

Foreman appreciates the opportunity to speak to people from this region, noting that it helps audiences relate to him since he is from the area. He cites this relationship between an audience and an astronaut from their region as a major factor behind the large number of Ohio astronauts— a tradition he hopes to help inspire in the next generation. He hopes to inspire students to pursue careers as scientists, researchers, engineers and astronauts.

"We were lucky with John Glenn and Neil Armstrong and Jim Lovell—some of the pioneers of the space program were from Ohio, and their adventures got more press in Ohio—hometown hero kind of stuff. We heard about it as kids growing up in Ohio—we heard about the space program and we could relate to this guy from Ohio who's now an astronaut, and thought 'maybe that's something I could do,'"Foreman says. "We'll hopefully continue to have many people from Ohio because there are so many of us [astronauts] now that come back and talk. Maybe even more kids will get inspired and want this job."

Foreman especially enjoys the opportunity to share with students the message of what kinds of careers can be open to them if they pursue a STEM (science, technology, engineering and math) related field. He knows he serves as a tangible example.

Becoming an astronaut was Foreman's dream from a young age. He attended the United States Naval Academy, and after graduation attended flight school. With the ultimate goal of becoming an astronaut, he applied to become a test pilot. After initially not being accepted to test pilot school, he earned his master's in aeronautical engineering. He served other roles in the Navy, and after his eighth application, he was finally accepted to become a test pilot.

He started applying to NASA at this time, and after eight applications, his perseverance paid off. He was selected to join the Astronaut Corps in 1998. And ten years later, his childhood dream was achieved. Foreman traveled to space twice, on STS-123 in March 2008 and STS-129 in November 2009.

Foreman relishes the camaraderie that develops among a space shuttle crew, both during training and during the mission itself. But his favorite part of space flight is the view.

"The views from space are the things that really burn into your brain—the memories of the awesome views from inside the vehicle and outside, during the space walks," Foreman says. “The views are sensational—there's this panoramic view you can see from inside your helmet, from horizon to horizon. The vastness of space, the beautiful colors of Earth." 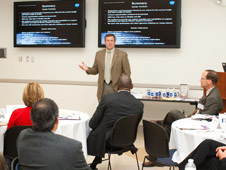 While at Glenn, Foreman's duties will include managing External Programs, which is comprised of the Community and Media Relations Office and the Education Programs Office. He will serve for one year, at which point he will return full-time to the Astronaut Office, with the intention of acquiring a leadership position in the office. While at Glenn, he'll also be flying test flights with Glenn's fleet of airplanes, and is excited to be back in the cockpit. He would very much enjoy returning to space, if possible someday.

"It's great being up there, having that experience. It's fun. I would definitely like to go do it again," Foreman says.

But for now, he is enjoying his time with the people of Glenn, serving the community at large. For Foreman, it's all about connecting with people.

"The best part of my time here so far has been meeting the folks that work up here. I've always enjoyed talking to people, finding out where they're from, what they do, what they're thinking. That's been a great thing," Foreman says. Tori Woods, SGT Inc.
NASA's Glenn Research Center
› Back To Top