Thousands of spectators gathered in front of the Forum in Inglewood, Calif., as the space shuttle Endeavour stopped temporarily for a celebration as it headed overland to its new home at the California Science Center in Los Angeles on Saturday, Oct. 13, 2012. (NASA / Bill Ingalls) › View Larger Image 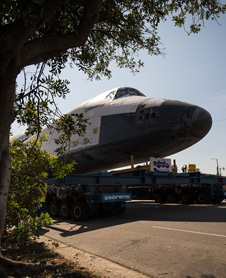 Space shuttle Endeavour is maneuvered up Crenshaw Boulevard on its way to its new home at the California Science Center in Los Angeles on Saturday, Oct. 13, 2012. (NASA / Bill Ingalls) › View Larger Image The space shuttle Endeavour, mounted atop an overland transporter, arrived at the California Science Center near downtown Los Angeles Sunday afternoon Oct. 14 after a more than two-day snail's-pace journey from Los Angeles International Airport through city streets.

Although the move ran ahead of schedule all day Friday and into Saturday morning, unanticipated difficulties in maneuvering the 122-foot-long, 78-foot-wingspan space shuttle through narrow streets and sharp turns late Saturday resulted in the entourage getting behind schedule, with Endeavour arriving some 17 hours after the estimated Saturday evening arrival time.

Endeavour was transported at less than two miles per hour, with numerous pre-positioning moves and stops that occurred as it went under raised transmission lines and across the 405 freeway – that segment pulled by a pickup truck before it arrived at Inglewood City Hall for an official ceremony Saturday morning Oct. 13. Endeavour will become the centerpiece of a six-day SpaceFest the Samuel Oschin Space Shuttle Endeavour Display Pavilion at the Science Center that will open to the public on Oct. 30 and extend through Nov. 4.

Eventually, Endeavour will be displayed at the science center in vertical position, attached to two solid rocket boosters and its giant external fuel tank as it would have been prior to launches from NASA's Kennedy Space Center.

Endeavour was NASA's fifth and final space shuttle to be built. Construction began on Sept. 28, 1987 and it rolled out of the assembly plant in Palmdale, Calif. in April 1991. It was named after a ship chartered to traverse the South Pacific in 1768 and captained by 18th century explorer James Cook.

Shuttle Endeavour flew 25 times, traveling almost 123 million miles and accumulating 299 days in space. Like shuttles Discovery, Enterprise and Atlantis, Endeavour's next mission will commemorate past achievements in space and educate and inspire future generations of explorers and engineers at the science center, located in Exposition Park adjacent to the Los Angeles Memorial Coliseum and the University of Southern California. 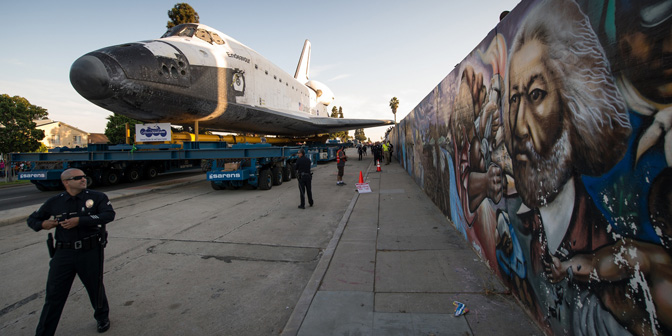 Space shuttle Endeavour is maneuvered past a mural on Crenshaw Boulevard on its way to its new home at the California Science Center in Los Angeles on Saturday, Oct. 13, 2012. Beginning Oct. 30, the shuttle will be on display in CSC's Samuel Oschin Space Shuttle Endeavour Display Pavilion. (NASA / Bill Ingalls) › View Larger Image