Blowing in the Wind – Tunnel, That is, at Albuquerque Balloon Fiesta 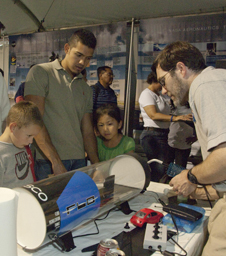 NASA exhibits and education lead Tony Springer (right) demonstrates a flow visualization wind tunnel to help visitors conceptualize how a wind tunnel works and what it contributes to aeronautics. The miniature wind tunnel was one of the interactive displays in the NASA exhibit at the 2009 Albuquerque International Balloon Fiesta. (NASA photo / Tom Tschida) Aeronautics can seem like such heady stuff, but NASA staff members at the Albuquerque International Balloon Fiesta used a tool to bring some sky-high concepts down to Earth for Fiesta visitors.

One such tool was the flow-visualization wind tunnel that brings the wind tunnel aeronautical engineering technology down to a more manageable, desktop size.

“Before we fly anything it’s tested in a wind tunnel, regardless of whether it is researched at NASA or with our partners in other government agencies, industry or academia,” said Tony Springer, NASA lead for communication and education.

Visitors at the Balloon Fiesta had an opportunity to experience for themselves the value of wind tunnels and how they work, regardless of how they’re used to test components, concept models or full-size aircraft or automobiles.

In the case of the miniature flow-visualization wind tunnel, a smoke-like vapor is used to demonstrate the airflow around an object placed in the wind tunnel. Wind-tunnel components take incoming air through a honeycomb material that increases the air to provide what researchers call laminar flow, or smooth air.

The model wind tunnel permits people to observe airflow patterns over scale-model aircraft and cars to better visualize what researchers are looking for in their designs. It also shows how the wind tunnel can help those researchers see on the ground a representation of how a concept, shape or component will perform in flight.

“We can show people how air moves over or around an aircraft and explain to them how similar methods are used in launch vehicles and even tall buildings to see how the air is going to flow, or what the aerodynamic characteristics are of the object,” Springer said. 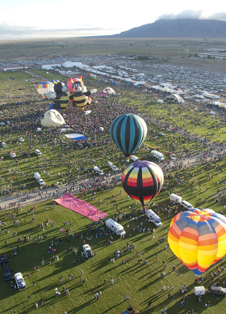 A wave of hot air balloons takes off during a mass ascension during the second day of the Albuquerque International Balloon Fiesta Oct. 4. (NASA photo / Tom Tschida) NASA uses wind tunnels at its centers, other government agencies or at industry-partner facilities. The tunnels range in size from a few inches to full-scale tunnels of 80 by 120 feet that can test a full-sized aircraft, he explained.

“Wind tunnels allow you to determine what the aerodynamics of a vehicle are before you actually expend money on a full-scale aircraft. They’re also used to reduce the unknowns, because you don’t want to put a person or some hardware at risk,” Springer said.

The concepts usually start small and get larger as the test article solidifies from data acquired through a number of increasingly complex tests in incrementally larger wind tunnels with bigger and bigger models, Springer said. Researchers essentially start off with a toy, where they can take the wings and flight control surfaces off and they can change out components to determine the optimum aerodynamic range through wind-tunnel tests.

“Every U.S. commercial and military aircraft or launch vehicle has been tested in NASA wind tunnels or uses NASA-developed technology. NASA has gone beyond the fundamental research that defines the concepts to actual application of them in the wind tunnel and following on with flight test,” Springer said.

A number of key modern aircraft technologies were first proven in wind tunnels before undergoing the crucible of flight research.

A team led by Dr. Richard Whitcomb of Langley Research Center, Hampton, Va., originated a number of those technologies, including area rule, the supercritical wing and winglets.

Area rule is the concept that a narrowing of the fuselage over the wing reduces aerodynamic drag at transonic speeds. 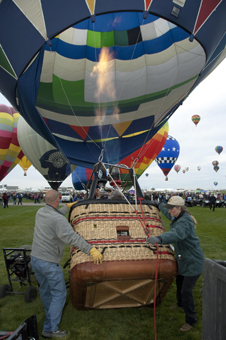 Crewmembers tip a hot air balloon gondola upright to prepare it for the final stages of launching. (NASA photo / Tom Tschida) The supercritical wing, an airfoil shape that reduces drag at speeds just below Mach 1, enables an aircraft to go slightly faster or see an increase in performance as a result of drag reduction. Research flights made at NASA’s Dryden Flight Research Center, Edwards, Calif., with a modified F-8 validated wind-tunnel predictions that aircraft using the supercritical wing experienced increased cruising speed, saw improved fuel efficiency of about 15 percent, and saw better flight range than those featuring conventional wings. As a result, supercritical wings are now common on most modern subsonic military and commercial transports.

Winglets, which were tested on a KC-135 at Dryden, are end plates on the wing that “fool” the wing into behaving as though it had a longer span. In other words, with winglets, the wing is more efficient without the performance penalties of actually having a larger wing. The economic advantages of winglet use eventually led to their adoption on light aircraft, business jets, airliners and heavy military transports.

Another area of wind-tunnel use is icing research, which has made flight safer through use of NASA’s world-class facilities, Springer said.

Aerodynamic drag reduction also is valuable to the design of semi trucks and racecars.

In fact, a research effort led by Ed Saltzman at Dryden on aerodynamic drag on semi trucks revolutionized the trucking industry in the 1970s. That research lead to major design changes resulting in an increase in efficiency and a 20 to 25 percent increase in fuel economy over vehicles that did not feature the aerodynamic improvements.

A professional racing association used the NASA Langley Full Scale Wind Tunnel for a detailed look at aerodynamics on racecar drag reduction. Another area of interest was the impacts of aerodynamics with multiple racecars, Springer said.