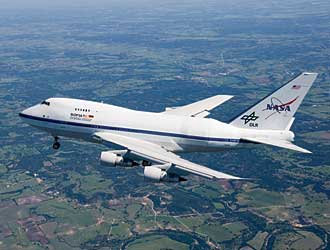 Image above: The NASA 747SP containing an infrared telescope made its first flight over the skies of Waco, Texas, where maintenance and modification work was completed by L-3 Integrated Systems prior to the aircraft’s transfer to Dryden.
NASA photo by Carla Thomas

The Stratospheric Observatory for Infrared Astronomy, or SOFIA made its first checkout flight recently. The flight marked a new day in transitioning work with the aircraft from significant modification to the start of flight tests, completion of subsystems integration and, eventually, to the task of exploring the heavens.

The SOFIA still has a way to go before routinely engaging in science flights. Progress is measurable, however, and it's expected that flight tests to validate the structural modifications to the aircraft will begin this fall, said Bob Meyer, SOFIA program manager.

The largest of the extensive modifications involved cutting a sizeable hole in the aft fuselage for installation of the infrared telescope and a special door that will protect it. The first phase of flights will take place with the door to the telescope closed. Later flights will include telescope door-open flights. The SOFIA project is a joint venture of NASA and the DLR, the German Aerospace Center. NASA provided the Boeing 747SP specially modified aircraft and will conduct flight and mission operations, while the Germans contributed the telescope, which has a primary mirror measuring more than eight feet in diameter. In addition to the most advanced telescope of its kind - one Meyer calls an engineering marvel - the Germans also provided upgraded engines and subsystems as well as a new coat of paint for the aircraft. 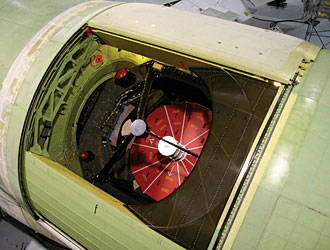 Image above: The German-built telescope that is the heart of the Stratospheric Observatory for Infrared Astronomy is nestled in the NASA 747SP’s rear fuselage.
Photo Courtesy of L-3 Communications/USRA

Although it will be years before full-scale science operations begin, Meyer said science flights have been scheduled during the second of three phases of flight tests, when the critical door of the NASA 747SP is ready to be opened in flight. Flight tests are scheduled to take about a year, but installation and integration of aircraft subsystems may take two to three. First observations with the 45,000-pound telescope during mission conditions are expected in late 2009, he added.

"As soon as possible, we want a science instrument on the plane to get some science data," he said. "Dryden is working diligently to get the observatory flight-tested, to get to the science as quickly as possible."

To that end, a double operations schedule is proposed in which two shifts will be working for much of the time the aircraft is at Dryden to accelerate regular maintenance work, which has been deferred, and installation of key subsystems and instrumentation, said John Carter, SOFIA aircraft project manager.

As flight research begins, key subsystems will be completed and integrated, including installation of the hardware and motors needed to open and close the door that shields the telescope.

"It represents a coordinated effort to produce something truly outstanding," Carter said of the teamwork among SOFIA partners.

Ed Austin, SOFIA science project manager at Ames Research Center, Moffett Field, Calif., said that Ames has primary responsibility for management and oversight of the Observatory's science program, including the missions to be accomplished onboard and the operation of ground facilities. Ames' responsibilities also include the integrated telescope, science instruments and software, and observatory functions.

In addition, as part of Carter's aircraft project, Ames personnel are assisting with the telescope cavity door design work, fabrication of its control system and installation and integration work. Key tasks for the Germans will be telescope checkout and test.

"The mission control system software ties the science instruments, telescope cavity door and aircraft systems together to use the airplane to point the telescope at a particular celestial object and keep it focused on that object," Austin explained.

The principal advantage of an airborne versus land-based observatory is in the infrared study of the skies. At altitudes of about 41,000 feet, the aircraft is flying above more than 99 percent of atmospheric water vapor, which obscures the infrared spectrum when it is viewed through an Earth-based telescope. 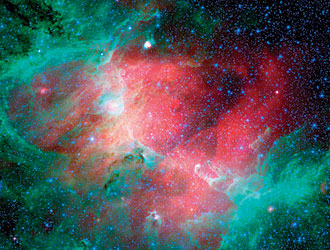 Image above: This haunting image shows the Eagle Nebula M-16 as photographed in the infrared spectrum.
Photo Courtesy of the Spitzer Space Telescope

In addition, the SOFIA has a distinct advantage over space-based satellites and space telescopes in that it can be deployed quickly in the event of, say, a comet's appearance and can engage in missions around the globe without the costs of repositioning a space-based asset. Built to be a sensitive telescope in the infrared and submillimeter spectrum, it is slightly larger than the Hubble Space Telescope, which was designed primarily for observations in the visual and ultraviolet portion of the electromagnetic spectrum.

"We can open up some wavelengths that are impossible to see from any ground-based observatory," Austin said. "We also can fly low-technology-readiness-level instruments because we can integrate the instruments with the telescope, fly the mission and return to our base of operations the following day or following morning. We can afford to use these state-of-the-art instruments that you can't fly in a space-based mission because of technology risks."

"It really is a benefit," Austin continued. "We plan to go into the Southern Hemisphere to see the galactic center and as we have targets of opportunity - events like occultation - we can position the aircraft anywhere in the world to take advantage of some really unique things that ground-based observatories are likely not able to get. We also will use the kinds of high-technology instruments at low-technology-readiness levels that the space guys are not likely to have." 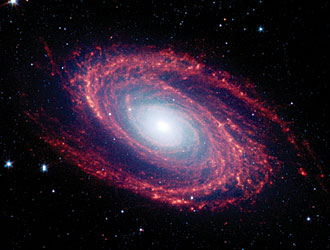 Image above: Astronomers will use the SOFIA to examine other galaxies, such as this infrared image of the Spiral Galaxy M-81.
Photo Courtesy of the Spitzer Space Telescope

According to the Crystal Reference Encyclopedia, an occultation is an astronomical phenomenon observed when a planet or moon passes across the line of sight to another body. An eclipse of the sun is an occultation; such events are used by astronomers to make observations that can't be made under other conditions. One example of the type of information astronomers can glean through an occultation is that, when Pluto is positioned between the Earth and a star, it is revealed that Pluto has an atmosphere.

The SOFIA is expected to be an improvement over the storied and now-retired Kuiper Astronomy Observatory aircraft that for 21 years was operated by Ames Research Center, said SOFIA Chief Scientist Eric Becklin. 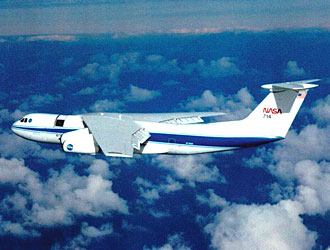 Image above: The Kuiper Airborne Observatory is pictured during one of the missions flown as part of a 21-year career that wrapped up in 1995.
Photo Courtesy of Ames Research Center

"One of the things that SOFIA can do that Kuiper couldn't do is - because of its large aperture, it actually has a clearer view of the universe. We'll have a sharper view. In fact, it will be the sharpest view we'll have at some of the wavelengths we're looking at," he said.

Researchers can't be certain what they'll find with the new airborne observatory but judging from past experiences, Becklin said, the possibilities are, well, galactic.

"The most exciting science is really trying to understand the chemistry and, potentially, the biology that's going on in space, and really getting to the heart of the question of, did life form here on Earth, or did it form out in space?" he said.

The SOFIA alone won't offer answers to how life began on Earth, but mission planners expect that the science conducted on the aircraft could contribute to new ways of looking at the universe.

"If we can actually change the paradigm of where life formed - we all know we came from the stars and all the molecules that make up our body were formed in massive stars, but if we can understand how life came about and (understand that) it really came from space, that will really change people's thinking," Becklin said.

There are advantages to using infrared telescopes - like the one featured on the SOFIA - to study the universe versus using other wavelengths.

"An advantage of infrared (versus other wavelengths) is that it 'peers' through the dust that is out in space," he continued. "There is a lot of dust in space; it's between stars. The view that we get of the universe in the optical or ultraviolet (wavelength) is biased by dust. SOFIA will probe right through that dust. 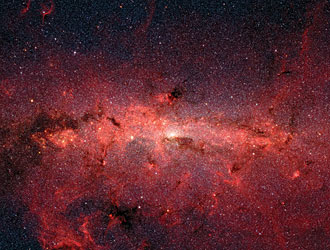 Image above: The photo shows the center of the Milky Way Galaxy, one of many points of interest to astronomers.
Photo Courtesy of the Spitzer Space Telescope

"In the visible and ultraviolet, you're mainly looking at stars. When you look in infrared you see stars, but also see more strongly the dust and gas those stars formed from or are throwing off as they die. You really get a different view of the universe when you look in the infrared."

The SOFIA is expected to be a key component of the NASA astrophysics program, aimed at exploring fundamental questions about the universe. The SOFIA will help astronomers learn more about the birth of stars, the formation of solar systems, the nature and evolution of comets, the origins of complex molecules in space, how galaxies form and change and the mysterious black holes at the center of some galaxies - including our own.

Modifications to the Boeing 747SP airframe to accommodate the telescope, other mission-specific equipment and the large external door were made by L-3 Communications Integrated Systems of Waco, Texas.

The science portion of the SOFIA program will be planned by Ames Research Center and managed by Universities Space Research Assn., or USRA, of Columbia, Md., and the Deutsches SOFIA Institut, or DSI, of the Universität Stuttgart, Germany.