Dryden's Flight Loads Laboratory is one of the only government facilities available for researching mechanical and thermal loads simultaneously on everything from large structures or systems up to full-sized aircraft.

"There are only a few places in the U.S. that can do this type of large-scale testing within the government and we're the only one on the West Coast," said Larry Hudson, loads lab thermal structures test engineer.

This unique capability may soon be put to use testing the latest components and subsystems for hypersonic and space-faring vehicles, Hudson said.

One application for the loads lab research can be seen in recently completed work on the X-37 prototype, a reusable space vehicle being developed by the government. Once a NASA project (managed at Marshall Space Flight Center, Huntsville, Ala.), the Dryden lab completed thermal and mechanical testing on three key X-37 components when the program transitioned to management by the Defense Advanced Research Projects Agency, or DARPA. Also researched at Dryden was a fourth test article considered critical to future space vehicles with a design similar to that of the X-37. 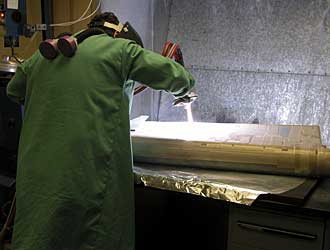 Research on the three X-37 components involved more than 30 tests during a two-year period from 2003 to 2005. Components were heated to more than 2,500 degrees Fahrenheit. The components tested included a carbon silicon carbide flaperon subcomponent, a carbon-carbon flaperon subcomponent and a carbon-carbon flaperon qualification unit. The flaperon accounts for two of the X-37's five flight control surfaces. It is used for roll control and to adjust for drag during atmospheric flight and airspeed during approach and landing. The flaperons are located on the trailing edge of each wing.

For the X-37 flaperon qualification unit, test objectives included verifying the structural model and finite element analysis, or FEA, used to design the carbon-carbon flaperon; verifying the thermal analysis model used to predict temperature distributions and time histories in the flight environment; demonstrating the manufacturability of the flaperon design and evaluating the structural performance of design elements under representative flight, thermal and static load conditions, and verifying the mechanical and thermal properties of carbon-carbon materials used in the design analysis.

The thermal and mechanical loading conditions applied to the components simulated what the parts would encounter in actual flight. The tests qualified the flaperon design and manufacturing methods for flight, and information from the tests will be used in evaluating thermal and loading models associated with creating parts for hypersonic and space vehicles.

About 15 to 20 people, including customer staff members, conducted the research. Loads lab staff designed, fabricated and assembled unique equipment used to perform the tests. So successful was the team that it was recognized at Dryden with a 2005 NASA Group Achievement Award.

In addition to that work, Hudson said the loads lab also tested a Next-Generation Launch Technology program item designed as a body flap envisioned for use in future, X-37-like space-faring vehicles. Heating and mechanical loading of that test article were not part of baseline X-37 tests, but the applied thermal and mechanical loads were derived from X-37-like re-entry trajectory information. 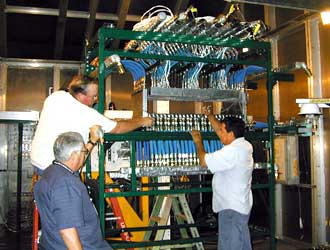 "The Flight Loads Laboratory has the unique ability to perform large-scale, thermal structure testing ranging from cryogenic temperatures to temperatures up to the 3,000-degrees-Fahrenheit range. We also have the ability to define thermal and mechanical loading on structures. We can do our testing in the air or in an inert atmosphere (artificially created in the lab setting)," Hudson said.

Technology researched in the loads lab could be used for developing new capabilities for re-entry vehicles and hypersonic atmospheric vehicles, Hudson said. High-temperature instrumentation on carbon-carbon and carbon silicon-carbide structures is a unique discipline that provides analysts and designers with valuable strain and temperature data, which aids them in validating analysis and models.

Hudson sees the information gathered from X-37 research and lessons learned from that and other loads labs projects as a database that can be available for hypersonic research within NASA's Aeronautics program. Using that information to advance technologies required for development of next-generation hypersonic vehicles is where the loads lab could potentially make the greatest contribution.

"Our goal," said Hudson, "is to provide accurate data under simulated flight conditions to analysts so they'll have the best possible opportunity for validating their models of advanced hot-structures and thermal protection materials.

"As a follow-on goal, we want to take the validated high-fidelity models and come up with the tool or tools that can be used to simplify the model so that it can run faster, yet contain all of the pertinent information necessary for vehicle designers to do their job more accurately and efficiently."

In addition to providing information for physics-based modeling design and analysis and optimization tools, Hudson sees a practical role for the lab in helping companies advance aeronautics data. For example, a company needing to qualify a part, subsystem or even an entire aircraft for use at temperatures up to 3,000 degrees Fahrenheit could tap loads lab personnel to conduct the necessary tests.

"Our plan is to partner with private industry and other government entities through cost-sharing agreements in an effort to advance structural technologies that are useful to not only our customers, but also to NASA and the technical community," he said.