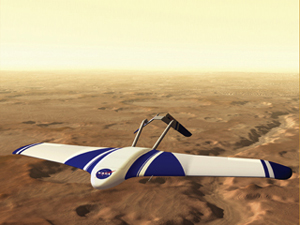 It won't be long before an airplane can be sent to Mars in a carrier spacecraft and released from its aeroshell into the atmosphere, ready to collect information and send detailed imagery back to scientists on Earth. The data gathered is expected to lead to new questions and answers that will impact future science missions.

Image Right: An artist's concept of the Aerial Regional-scale Environmental Survey of Mars, or ARES aircraft. It is believed a planetary flight vehicle like the ARES could survey Mars and gather key information for a manned Mars mission. NASA Illustration by Garry D. Qualls

If it's up to Ray Rhew, Planetary Flight Vehicles project manager in NASA's Vehicle Systems program, it will be as soon as 2007 that such a concept could be selected by NASA for a science mission in advance of manned exploration of Mars.

Aerodynamically it's an interesting challenge, Rhew said, because the Martian atmosphere offers a unique environment for flight. An aircraft on Mars would encounter similar conditions to those on Earth at an altitude of 100,000 feet. Maintaining flight in such thin air requires either very long wings or a very powerful propulsion system to provide lift.

"We want (the airplane) to fly for a long duration and carry a heavy payload for gathering data on the environment as part of a science mission or as a precursor to humans going," Rhew explained. "The other issues you're dealing with are getting an airplane from a stowed configuration - which it's in as it transits from Earth to Mars - into a flying configuration. There's a big focus on technology development in getting that phase of the mission worked out and reliable. We need to be very confident that it will work properly." 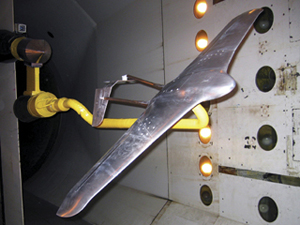 An airlaunch research flight in 2002 by the Aerial Regional-scale Environmental Survey of Mars - or ARES - airplane was a first step toward building that confidence.

Image Left: A model of the ARES is shown in a Langley Research Center wind tunnel. NASA Photo

The ARES vehicle is one concept for flight on Mars being advanced at NASA's Langley Research Center in Hampton, Va. In the ARES test, a half-scale airplane was airlaunched from a helium balloon with the focus on deploying the airplane from a stowed configuration, wings and tail folded, at an altitude of about 100,000 feet.

What's next for the Vehicle Systems program team is an airlaunch of a full-scale planetary flight vehicle from its aeroshell, where it will be stored in transit to Mars. This test series, scheduled for early 2006, will include the airplane's "kick out" from its stowed position as part of an airlaunch test at 125,000 feet. It will unfold then engage in a sequence of maneuvers, proving it will work and work reliably, Rhew said.

Mars missions by NASA's Science mission directorate, set for 2011, will offer the first opportunity for use of such a vehicle. Other opportunities also are being considered, Rhew added. The Exploration Systems mission directorate, for example, may be interested in exploring the use of planetary flight vehicles for Mars missions prior to manned vehicles reaching the planet.

A planetary flight vehicle mission could represent a combined effort among the Aeronautics Research, the Science and the Exploration Systems mission directorates in gathering information for human exploration.

The key technologies that will enable deployment and first flight of a planetary aircraft are the aeroshell extraction system, the unfolding of the airplane and energy absorption, Rhew said. The deployment system could have applications for other planetary vehicles to be developed under the auspices of Planetary Flight Vehicles research activities in the Vehicle Systems program. 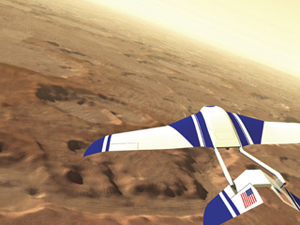 Other critical elements include guidance and navigation systems.

Image Right: Here is another view of the Aerial Regional-scale Environmental Survey of Mars, or ARES aircraft. NASA Illustration by Garry D. Qualls

"We'll use a combination of sensor systems such as an air data system, a radar altimeter and an inertial measurement unit, as well as onboard topographic mapping along with initial measurements from the carrier spacecraft."

The airplane's propulsion system is another key to success.

"To keep it simple, we're using a rocket-based propulsion system," he said. "We need to bring our own fuel. The Martian environment is made up of mostly carbon dioxide so you don't have an oxidizer there for a combustion engine. We'll use a bi-propellant rocket fuel."

That fuel consists of mono-methyl hydrazine and nitrogen tetroxide with nitrogen additives (also known as MON-3), which has been used in proven systems. To reduce mission risk, researchers hope to use available systems with proven reliability wherever possible.

While universities and research centers across the nation also are looking at next-generation Mars aircraft concepts that include vertical takeoff and landing as well as some less proven technological ideas, he said, NASA envisions developing the early prototypes that will aid those efforts.

"We view the NASA efforts as early first steps toward demonstrating systems that work, and then building on them," he said.

"The first landers on Mars didn't move. The next ones moved a little.

Now, the Mars rovers have progressed to where they are covering 10 times what they were capable of doing early on. You have to learn to crawl before you can walk and run. We want to keep it simple, and make sure it works."

A clear vision exists among NASA researchers for what a Mars airplane could accomplish.

"The objective of an aerial platform in general is to provide better resolution than orbiters can, (to) cover more ground than a rover and also to tie data from a rover in with (data from) orbiters to give you a cross link to the two," Rhew explained. "The objective of the instruments and what they'll measure is changing because as (scientists) learn more, that's going to evolve.

"The things we think we're going to do include looking for methane (as a sign of life), mapping terrain with cameras, and other scenarios. The aircraft might also be able to look for water - seek subsurface water, or find traces of water in the atmosphere that would indicate where it might be."

If the Exploration Systems mission directorate taps planetary flight vehicles for research, those missions probably would focus on two main goals: finding safe landing sites with smooth terrain, for piloted vehicles, and finding resources on the planet's surface that might be useable in future missions.

Other Vehicle Systems program technology development currently under way also could factor into planetary flight vehicles. Structures and materials, weight reduction, autonomy hardware and software developed through projects such as the 100-Day Demonstrator aircraft could play key roles in future planetary flight vehicle projects. Future systems would benefit from software presently being developed to assist an aircraft in making mission decisions and from use of vehicle health-management software.

The converse is also true, Rhew said. Technologies developed in planetary flight vehicle projects could have applications in other vehicles. These applications could include development of deployment, navigation, and integrated systems such as multiple vehicle deployment coordination and collaboration.

NASA is drawing on its expertise Agency-wide in these initiatives and the effort to develop planetary vehicles is one good example.

Engineers at Glenn Research Center in Cleveland played a key role in the initial propulsion-needs and trade studies, Rhew said. Ames Research Center, Moffett Field, Calif., is key to airfoil and surface interactive research, and the expertise of the Jet Propulsion Laboratory, Pasadena, will be sought in Mars mission planning. Dryden will play a key role in flight research of planetary flight vehicles, Rhew said.

And Mars is not the only planet/moon with an atmosphere that would support flight vehicle-based exploration. Vehicles that could explore Titan or Venus will look different because their atmospheres are different. Titan and Venus have atmospheres that are denser and colder/hotter and feature different chemical compositions, each with its own set of challenges. Studies to determine what those missions could look like are being developed in multiple NASA mission directorates, and when it is time for those missions to come to fruition, the Planetary Flight Vehicles project technologies of the Vehicle Systems program will be ready to tackle methods of achieving them.