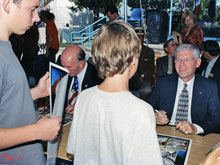 Many know him as "Fast Eddie," the whiz kid NASA test pilot who was the youngest-ever graduate of the U.S. Navy's Test Pilot School.

But it was a lot more than youthful charisma that earned Edward T. Schneider his slot on the City of Lancaster Aerospace Walk of Honor. It was a long list of accomplishments as test pilot, instructor and researcher in a career in which he logged more than 7,800 hours in 87 types of aircraft. 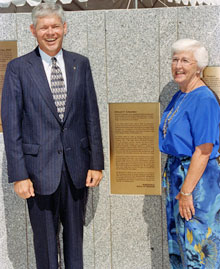 "It's great to be honored in this manner and to return to a city where my family spent the happiest years of our lives," Schneider said in remarks to the audience gathered at Lancaster's Boeing Plaza for the induction ceremony. And he was quick to acknowledge those who helped him achieve the honor.

"Without the support of all the people at Dryden, especially the mechanics and technicians, I wouldn't be standing here today."

A U.S. Naval officer from 1968 to 1983, Schneider graduated in 1973 from the Naval Test Pilot School at Patuxent River, Md., the youngest graduate in the institution's history. He was an engineering test pilot on 11 naval research programs, a test pilot school instructor and the F-4 program manager and senior test pilot at the Naval Aviation Depot, North Island, Calif.

He joined NASA in 1983 as Dryden's project pilot, flying in the SR-71 and F-104 high-speed research programs, with the F-18 systems research aircraft, the B-52 launch aircraft, the NASA Learjet and others, eventually becoming chief test pilot. In 2000 Schneider took a position as T-38 instructor and WB-57F research pilot at Johnson Space Center, Houston, performing Earth sciences and classified missions. He retired in 2004.

Schneider is a Fellow and Past President of the Society of Experimental Test Pilots and recipient of the American Institute of Aeronautics and Astronautics Chanute Flight Award, the NASA Distinguished Service Medal and the NASA Exceptional Service Medal. He is the youngest pilot to be inducted into the James B. Taylor Jr. Memorial Carrier Test Pilots Hall of Honor in Charleston, S.C.

If he seemed destined for the path that led him to the Walk of Honor, perhaps it was because he was clear from early stages of his career on what he wanted to achieve.

As a Navy test pilot, "I had read Tom Wolfe's book, 'The Right Stuff,' and dreamed of coming to Edwards to work with some of the best people in the business," he said following the Walk of Honor ceremonies.

"It's a real privilege to be honored alongside those people, many of whom were my heroes."

Peter Merlin of the Dryden History Office contributed to this article.

A word about the definition of space

There has long been controversy in the space-enthusiast community over exactly what constitutes an astronaut. A similar controversy has surrounded the definition of the boundary of space. The latter question, at least, has an answer – two of them, in fact.

Strictly speaking, an atmosphere does not end at any given height, but becomes progressively thinner with altitude. When aeronautics was a young profession, some thought space began at about 15,000 feet, since that's where the partial pressure of oxygen in the atmosphere is too low to permit humans to function for extended periods of time. This definition soon gave way to others that defined the beginning of space as the end of the stratosphere, the thermosphere or the exosphere. None of these definitions was made official by any organization or government, and all soon faded from the lexicon.

During the 1950s, when NASA's predecessor agency, the National Advisory Committee for Aeronautics, and the U.S. military were first thinking about vehicles that would ultimately fly into space, engineers decided to draw an arbitrary line at the altitude where dynamic pressure was less than one pound per square foot, since traditional aerodynamic control surfaces would be rendered largely useless at that point. Although this altitude differs from day to day and area to area due to weather conditions, in general it is at about 50 miles (264,000 feet, or 81 kilometers) and roughly marks the end of the mesosphere. This definition was codified into regulations within the military services that awarded an aeronautical rating of 'astronaut' to military pilots who flew above 50 miles (in the 1950s, extreme altitudes were expressed in miles, not feet).

Somewhat later, aeronautical scientist Theodore von Kármán calculated that above an altitude of approximately 100 kilometers (62 miles, or 328,084 feet), a vehicle would have to fly faster than orbital velocity in order to derive sufficient aerodynamic lift from the atmosphere to stay aloft. Although the precise altitude differed based on several variables, von Kármán proposed that 100 kilometers be designated the boundary of space for purposes of engineering consistency. This 100-kilometer "Kármán Line" was recommended to the Fédération Aéronautique Internationale, the internationally recognized body for recording aeronautic achievements. Upon adoption, it became the internationally accepted boundary to space for the purposes of world records and many treaties.

It is interesting to note that the U.S. government has never officially adopted either of these standards, because doing so would complicate the issue of overflight rights for surveillance aircraft and reconnaissance satellites. (The Department of Defense is the exception, which, for purposes of aeronautical ratings, does subscribe to the FAI definition.)

The question of exactly who is an astronaut is more involved, at least in the U.S. Within NASA, 'astronaut' is a job description for those individuals selected to be members of the Astronaut Corps at the Johnson Space Center in Houston. Once an astronaut candidate completes training, he or she becomes a career astronaut, even before their first space flight. Within the U.S. military, however, the term astronaut is reserved for those individuals that have actually flown above an altitude of 50 miles.

During the course of the X-15 joint program between NASA and the Air Force, eight pilots flew above that altitude, one flying above 62 miles. Of these eight, five were active-duty Air Force pilots who were awarded an aeronautical rating of astronaut. In essence this involved receiving a small sheet of paper (8.5 by 5.5 inches) bearing a rubber-stamped signature of the official issuing it, and the authority for the pilot to wear metal astronaut wings on his uniform. There was no other fanfare, money or fame. These five pilots included Michael J. Adams, Joe H. Engle, William J. "Pete" Knight, Robert A. Rushworth and Robert M. White. It was, however, the existence of these aeronautical orders that allowed Mike Adams' name to be placed on the Astronaut Memorial at the Kennedy Space Center, Fla., over the objections of many.

Unlike the Air Force, NASA had never issued pilots' wings per se, and until the space shuttle program, never issued astronaut wings in any form. Nor did NASA have an official definition of "astronaut" other than as it referred to someone assigned to the Astronaut Corps. As a result, the three NASA X-15 pilots who had flown above 50 miles – William H. Dana, John B. "Jack" McKay and Joseph A. Walker – were never specifically recognized for their achievement. Oddly, many individuals assigned to the Astronaut Corps in Houston were considered astronauts but had never flown in space.

This seeming inconsistency has been discussed for over 40 years, mainly among the space enthusiasts who have little to do but worry about such things. Roger Launius, a former NASA Chief Historian, remembers numerous public inquiries on the subject, with no particular answer other than "astronauts come from Houston." Perhaps ironically, it all seemed to matter much more to the enthusiast community than to the individuals involved, who were more than content to be known simply as test pilots.

Through a conversation with then NASA Administrator Sean O'Keefe and associate administrator of the Space Operations mission directorate, William F. Readdy, I hoped to remedy the situation. This conversation took place in 2004, just weeks after the Federal Aviation Administration had awarded astronaut wings to civilian pilots Brian Binnie and Michael W. Melvill of Scaled Composites Inc. for their flights in SpaceShipOne. Both O'Keefe and Readdy agreed it would be appropriate to recognize the three NASA X-15 pilots for their achievements.

During the conversation, I mentioned the discrepancy between NASA's and the military's definition of "astronaut." The first issue was whether to select 50 or 62 miles as a defining altitude; Readdy selected 50 miles to eliminate any inconsistency between military and civilian pilots flying the same vehicle.

Beyond that, a major stumbling block in recognizing the X-15 pilots as astronauts had been, according to lore, the wishes of the Astronaut Office at the Johnson Space Center. To determine how the office actually felt about the issue and in an effort to resolve any potential concerns, I turned to Col. Michael J. Bloomfield, the Astronaut Office operations officer. Bloomer, as Mike is known, had flown on three space shuttle flights. Readdy also had flown three times. They seemed appropriate ambassadors. Between the two of them they smoothed the way; the chief of the Astronaut Office, Capt. Kent V. Rominger, subsequently agreed that recognizing the three NASA X-15 pilots would be appropriate and offered his assistance in the matter.

Figuring out exactly how to honor the pilots proved trickier. NASA does not issue metal astronaut wings, and has no official policy on the subject. In the end, it was decided that each pilot – McKay and Walker posthumously – would receive a set of the cloth-and-leather nametags worn by space shuttle astronauts on their flight suits, along with a certificate signed by Readdy, Rominger and Kevin L. Petersen, director of the Dryden Flight Research Center. Forty years after their groundbreaking achievements in the X-15 rocket plane, the three pilots finally got the recognition they deserved.

Dennis R. Jenkins is a consulting engineer in Florida who works on various aerospace projects, including 20 years on NASA's space shuttle program. He also is the author of "Space Shuttle: The History of the National Space Transportation System: The First 100 Missions," in addition to more than 30 other works on aerospace history, several on the subject of the X-15 program.

Dennis Jenkins
Special to the X-Press