Dryden set for CEV role
As steps are taken during the next two decades to develop a Crew Exploration Vehicle – using the Apollo missions of the past as a blueprint for future missions to the Moon and Mars – Dryden will play important roles in the CEV's development and operations.

Image Right: In this illustration, the proposed Crew Exploration Vehicle is seen with its solar panels deployed and docked with a lunar lander in orbit. NASA/artist's concept courtesy John Fassanito and Associates

In a Sept. 19 overview of the proposed CEV program (referred to as the NASA Exploration Systems Architecture Study), NASA Administrator Michael Griffin indicated that each NASA center would be part of the development effort. For Dryden, he mentioned a role in researching a system that would allow the CEV to abort after launch if necessary. In addition, he specified that vehicle-landing operations could take place at Edwards Air Force Base.

"As we've said in several prior briefings, (the CEV) needs to land on the west coast of some country, because we want the service module to go in the water, rather than landing on people's heads or on their cows," Griffin said.

An animated film illustrated Griffin's comments as he spoke. A landing sequence depicted in the film showed drogue chutes deploying from the CEV, its heat shield dropping off, airbags and three main chutes deploying.

"We're targeting this concept with Edwards Air Force Base as the landing point. That's the Compass Rose out at Edwards, if you've ever been there," he said, referring to the film. The Compass Rose is a manmade lakebed feature from which pilots take navigational headings.

"In this concept for touchdown, we use the airbags and the chutes to cushion the descent. Ultimately, it will be up to the contractor to decide the exact surface-contact method – some combination of airbags, retro-rockets or other means as required." 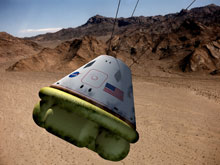 Image Left: The proposed Crew Exploration Vehicle is expected to look and land much like the Apollo capsules. Missions could potentially conclude with a landing at Edwards Air Force Base. NASA/artist's concept courtesy John Fassanito and Associates

Both the crew and cargo versions being proposed for the CEV will feature much of the current infrastructure and technology used in the space shuttle program, including shuttle main engines and extended but essentially identical solid rocket boosters.

Some new twists include solar arrays on the command and service modules, a first for U.S. spacecraft, and a new upper stage for the cargo version.

In order to meet these CEV objectives, Griffin said the space shuttle program will retire in 2010 and first flights of the CEV are anticipated to begin in the 2014 timeframe, though NASA has targeted 2012 for the first CEV flight. Current plans do not include any requests for additional funding for the Agency, but availability of funds will drive the CEV's completion, Griffin added.

Center Director Kevin Petersen reiterated most of Griffin's remarks at a Sept. 27 Dryden Town Hall. In an optimistic assessment of how Dryden will fit into the work of the CEV development program, he said a team was being formed to examine the possibilities.

"We have a lot of 'moonscape' out here we can help them out with," Petersen joked.

Dryden was selected as the lead under Johnson Space Center, Houston, for abort-system testing. Once a prime CEV contractor team is chosen, by spring of 2006, he said, additional details about the scope of the work will emerge.

Dryden's Jim Stewart, the Center's mission director for the Exploration Systems mission directorate, said that additional work also is on the horizon as a result of ongoing talks with representatives from Johnson.

How research on a system to abort after launch will be conducted and what roles Dryden will fill have not been determined, Stewart said. The abort tests will include multiple missile launches – how many has not yet been determined – at different altitudes and conditions.

Dryden is beginning to assign people to a CEV project team that will attend meetings at Johnson Space Center to discuss the prospects for additional work, some possibly beginning as early as 2007.

Once the configuration of the abort system is clear from the winning proposal, Stewart estimates that in 2006, more than two dozen Dryden employees will be a part of the effort to prove the abort system for use in manned space flight. The work is expected to continue through 2008 and possibly longer, depending on the number of launches.

"The abort system is a critical element of the CEV and the exploration program. These tests are required and they have to be done successfully," Stewart said.

And although Apollo set the standard for abort systems and the one to be developed for the CEV will be similar, "obviously Apollo was a different vehicle and a different launch condition," Stewart said. "It won't be exactly the same, but it's similar. It (Apollo) is the best reference we have."

In addition to the Dryden workforce, staff at Marshall Space Flight Center, Huntsville, Ala., will contribute propulsion expertise to the development effort and engineers at Kennedy Space Center, Fla., will contribute to work on the module-recovery process.

Again referring to the successful blueprint developed by the Apollo program, Stewart said multiple rocket launches will prove the abort systems for the CEV. While no rocket site has yet been chosen for the tests, White Sands Missile Range, N.M., was the site for similar testing of the Apollo abort systems, he added.