As neighbors of Edwards Air Force are well aware, supersonic jets cause a thundering boom that shakes walls and windows with a deep rumble, startling pets and humans alike. 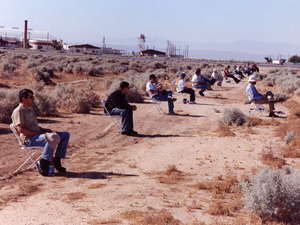 Image Above: Dryden volunteers sit beneath the flight path where an F/A-18 created a sonic boom. The 18 volunteers were helping researchers to determine whether detailed recordings of the sonic boom could be used to accurately simulate the real thing. NASA Photo By Tom Tschida

Dryden is leading a NASA effort to study ways of dramatically reducing those boom-related annoyances, which occur when an aircraft travels faster than the speed of sound.

As part of that effort, an aircraft demonstrator will showcase technologies designed to reduce the noise associated with sonic booms. In first stages of the experiment, a group of NASA and university researchers made complex recordings of sonic booms that will be replicated in a laboratory setting for a closer look a their effects.

"These tests are part of the research work to establish what is an acceptable boom," said Bob Meyer, Sonic Boom Mitigation Demonstration project manager at Dryden. "The next step is to see if a demonstrator vehicle can achieve that level of boom." The project is part of NASA's Vehicle Systems program.

"Concept-exploration studies are underway (see accompanying story) to investigate designing and building a piloted aircraft that is expected to fly by late 2008," he added. "The aircraft is anticipated to be in the 30,000-pound range and we expect to release a request for proposals this fall."

The demonstrator aircraft is expected to fly at speeds of from 1.4 to 1.8 Mach. For comparison, the European Concorde aircraft traveled at speeds of about Mach 2, but the supersonic portion of Concorde flights was permitted only over the ocean. Sonic boom mitigation is key to ending a prohibition by the Federal Aviation Administration on commercial or business jets flying supersonically over land, Meyer said.

In 2004, NASA asked 10 aerospace industry firms to identify where the greatest potential for financial benefit in supersonic research might lie. This group, called the Super 10, told NASA an urgent need existed for mitigating the sonic boom. Once that could be accomplished, the group said, the prohibition against overland supersonic flight due to sonic booms could end, allowing new opportunities for commercial and business aviation to emerge.

As part of the sonic boom recording and simulation experiments, NASA, the FAA and Transport Canada are co-sponsoring the Partnership for Air Transportation Noise and Emissions Reduction, or PARTNER Center of Excellence to conduct research into how people react to sonic booms, said Peter G. Coen, Supersonic Vehicle Sector manager, who is based at NASA's Langley Research Center, Hampton, Va. 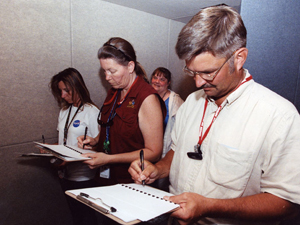 An element of this research being conducted by Pennsylvania State University, Purdue University and NASA is directed at determining better ways to simulate sonic booms in laboratory conditions by using detailed recordings of the real thing.

Dryden was the site for a sonic boom study June 15 when four F/A-18 research aircraft generated 17 sonic booms that were heard in the surrounding area. On the ground beneath the aircraft's flight track, an investigation team using sensitive microphones made detailed recordings of the booms, Coen explained. A group of 18 volunteers listened to the original sonic booms and the simulated booms created with the recordings to give their impressions on the accuracy of the simulations.

"The information gathered from the research flights will be used to identify features of the sonic boom, which will improve the realism of laboratory simulations," Coen said. "Eventually, these improved simulations will be used to identify what levels of sonic boom noise are not offensive to ground observers. Information gathered through that effort then could be used by NASA and industry to develop technology for future supersonic aircraft that are environmentally and community friendly."

Meyer said those tests focused on bow shocks, or shocks from the nose, while the current effort focuses on the entire aircraft.