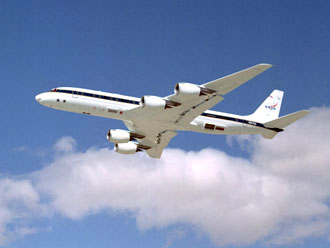 Image Right: The DC-8 - bearing its Dryden paint scheme - flies a mission in 2004. The research aircraft recently returned from a mission in Alaska. NASA Photo by Tony Landis

The Alaska AirSAR 2004 study began in September but the mission was delayed when the aircraft sustained damage during takeoff at Elmendorf Air Force Base in Anchorage.

Making the trek to Alaska during winter weather conditions proved a challenge for the Dryden-based Lockheed maintenance crew. In addition to being prepared to de-ice the aircraft - a procedure that's rarely called for at the aircraft's home base in Southern California - two crewmembers stayed with the DC-8 to keep both plane and onboard instrumentation warm during the cold Alaska night.

"The ground crew did a great job in getting the aircraft ready under a tight schedule and in getting us off each morning, on schedule and in less-than-ideal weather conditions," said Steve Durden, AirSAR manager at JPL in Pasadena.

"The volcanoes - Veniaminof, Shishaldin, Westdahl, Cleveland, Carlisle, Herbert and Spurr - are among the 100 active volcanoes at the higher latitudes in the North Pacific region," explained Ken Dean, research associate professor at the Geophysical Institute, University of Alaska at Fairbanks. "These volcanoes have the potential of injecting ash into the troposphere and stratosphere, which is of concern to commercial and military aircraft. Studying subtle volcanic changes may eventually improve the ability to alert the public, government agencies and industry of potential ash eruptions."

AirSAR acquired data that will be used to derive an accurate digital elevation model of the Hubbard glacier, which has been advancing since it was first mapped in 1898, enabling scientists to assess its mass.

New data captured by AirSAR during the 2004 study will be compared to similar data taken during 1988, to assess possible changes in recent climate patterns.

Scientists have gathered biophysical information of forest study sites from the Kenai Peninsula to Northern Alaska's Brooks Range to use in comparing vegetation at the study sites to that of surrounding areas.

Chris Miller, Dryden's DC-8 mission manager, credited Airborne Science personnel for the success of the mission, noting that some went beyond the call of duty and made heroic efforts to complete the study in difficult weather.

The Alaska study was funded by NASA's science mission directorate. The directorate's work is focused on understanding the Earth as an integrated system and using Earth system science to improve prediction of climate, weather and natural hazards.