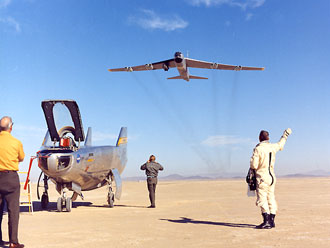 With a penchant for chasing tomorrow, NASA's B-52B "008" perenially carried the future of flight under its wing.

Image Right: Dryden pilot John Manke (later a Dryden Center Director) waves to the NB-52B crew after a successful research mission in which the "mother-ship" airlaunched the M2-F3. The lifting body aircraft validated an airframe shape that would later influence design of the Space Shuttles. NASA Photo

First taking to the air in June of 1955, the venerable aircraft began its illustrious, nearly 50-year U.S. Air Force and NASA career as a bomb navigation system test airplane for the Air Force's B-52 fleet. Ironically, the bomb/nav system test bomber spent the bulk of its career dropping flight research vehicles rather than bombs.

In 1959 it became one of two mothership launch aircraft for the X-15 program, which paved the way for America's early manned space flight efforts. Double-0-eight cut its teeth launching the X-15 on 106 of the program's 199 missions. 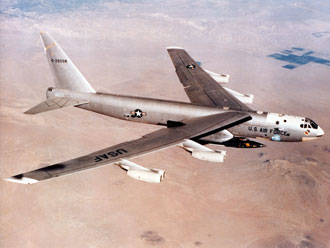 "I was here in January 1960 for the aircraft's first X-15 flight and in November 2004 for the last X-43A flight, and for all of the flights in between," said Roy Bryant, Dryden's B-52B project manager of nearly 30 years. "Pride, dedication and innovation have been the key elements of the people who maintained this vintage aircraft to support the many projects that have kept the United States at the forefront of aerospace development for the past 45 years."

Image Right: The NB-52B flies one of 106 missions in the X-15 program, for which the aircraft was originally assigned to Edwards. The aircraft has flown nearly 50 years and was instrumental in some of the most important research missions in aerospace history. It made its final flight Nov. 16, which, ironically, also involved carrying a hypersonic vehicle, the X-43A. The NB-52B was retired Dec. 17. NASA Photo

Since the end of the X-15 program in 1969, NASA 008 has supported virtually all of NASA's aeronautical research programs requiring airlaunch, and some research missions that didn't.

Beginning in the mid-1960s, NASA 008 carried aloft several types of lifting body aircraft over a 10-year period. These wingless wonders demonstrated the controlled flight without wings and precision landing without power that proved the viability of gliding Space Shuttle landings. With the arrival of the Shuttle era, NASA 008 dropped Shuttle solid rocket booster test vehicles in order to test the booster recovery parachute system. During the early 1990s, the aircraft kicked up plumes of dust on Rogers Dry Lake wringing out the Shuttle's new drag chute system. 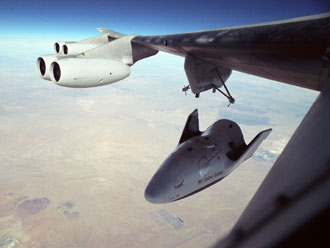 One of the more memorable missions for Bryant was a day in 1978 that one of the Shuttle solid rocket booster test vehicles didn't drop on command.

Image Right: The NB-52B was used in the successful 2001 airlaunch of the X-38 Crew Return Vehicle prototype. By using a parafoil (guided parachute), the X-38 program tested the concept of making short precision landings with lifting body-shaped aircraft. NASA Photo by Carla Thomas

B-52 launch panel operator Ray Young reported that his lights indicated the hooks holding the vehicle had opened, even though the vehicle remained attached to the pylon. Pilot Fitz Fulton tried maneuvering the aircraft to free the stuck vehicle, but to no avail. "There was a lot of concern that we'd damage the B-52 if it came loose on landing," Bryant remembers. Fulton eased the B-52 in for a smooth landing, and the test vehicle held on.

Over the years the aircraft launched various experimental fixtures, such as the FB-111 crew capsule, and advanced remotely piloted vehicles like the F-15 Spin Research Vehicle, both for the Air Force.

Maintenance crews over the years grew fond of the aircraft, treating it more like a classic car than an old bomber. Double-0-eight's crews kept it ship-shape, seldom failing to have the aircraft ready for a mission - not that the old bird didn't balk occasionally at the prospect. 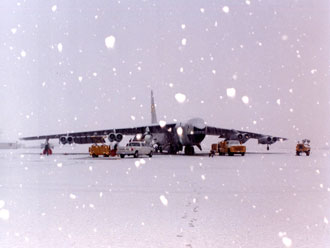 A hieroglyphic-like silhouette representing the last research mission, recently painted on by crewmember Monty Hodges, joined others on the aircraft's starboard fuselage, a virtual museum wall documenting every mission of the aircraft's flight through history.

As NASA 008 flies into the sunset, its legacy continues to soar into the future. Thanks for the ride, 008.