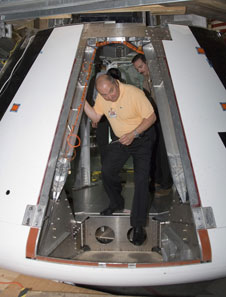 Vladimir Titov spoke to Dryden Safety Day attendees about his experiences and toured the Orion Abort Flight Test crew module, also known as Pad Abort 1. NASA Photo / Tom Tschida Vladimir Titov, the only living individual to have survived a spacecraft's abort on the launch pad, visited Dryden July 16 to speak about his experiences and view the center's work on the Orion Flight Test crew module, known as Pad Abort 1.

Space-capsule safety is something Titov and fellow cosmonaut Gennady Strekalov learned about firsthand when they were scheduled for launch Sept. 27, 1983, on board Soyuz T-10. A valve in the propellant line failed to close 90 seconds prior to liftoff during the terminal countdown; a huge fireball arose from a towering inferno at the base of the launch vehicle just one minute before launch, quickly engulfing the rocket. The automatic abort sequence failed as system wiring burned through.

Two launch controllers manually aborted the mission 12 seconds after the fire began. The Soyuz descent module was pulled clear by the launch escape system, and after being subjected to forces of 15 to 17 g's, the crew landed safely about two and a half miles from the launch vehicle. The rocket exploded seconds after the Soyuz separated. The two men were unharmed during their five-minute, 30-second flight.

Earlier that year, Titov had learned on his first mission that there is nothing routine in space. On April 20, 1983, Titov was commander of Soyuz T-8. He and Strekalov had been trained to repair a faulty Salyut 7 solar array. The mission called for docking with Salyut 7, but once in orbit the Soyuz rendezvous radar antenna failed to deploy properly. It was later discovered that the antenna had been torn off when the Soyuz payload shroud separated from the vehicle.

The crew received permission to proceed with a rendezvous using only an optical sight and ground radar inputs for guidance. During final approach, which was made in darkness, Titov believed that the closing speed was too great. Despite a maneuver to reduce the spacecraft's speed, he aborted the rendezvous to avoid a crash. No further attempts were made, and the crew returned to Earth. Titov also is a veteran of one mission on space shuttle Discovery and another on Atlantis.

He retired from the Russian Space Agency in 1998 and a year later joined The Boeing Co. in Moscow. He is the recipient of several awards, including the title Hero of the Soviet Union; he received the Order of Lenin in 1983 and 1988; the French awarded him the title of Commandeur de la Legion d'Honneur in 1988 and in 1990 he was awarded the U.S. Harmon Prize along with cosmonaut Musa Manarov. The two cosmonauts were the first Russian citizens to win the award in recognition of their world endurance record of nearly 366 days in space, marking the first time humans had spent more than a year there.

Titov's 1983 close call on the launch pad illustrated that nothing can be taken for granted in preparing for space travel. 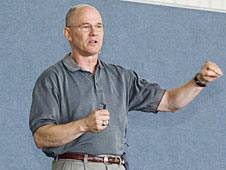 Lt. Gen. Richard V. Reynolds explains some of the lessons learned in a B-1A crash in August 1984 that resulted in the death of a fellow crewmember. NASA Photo / Tom Tschida At the Safety Day event, retired Air Force Lt. Gen. Richard V. Reynolds, a former Air Force Flight Test Center commander, explained the events surrounding an August 1984 B-1A bomber accident that illustrated there is no such thing as routine in aircraft missions, either. During a manual wing-sweep maneuver, the wings moved faster than the rate of fuel transfer, causing center-of-gravity limits to be exceeded during low-speed flight. Automatic mode for the swept-wing maneuver would have moved the wings at a much slower rate.

The B-1A entered a spin at low altitude. Despite flight parameters that required the crew to eject from the aircraft at no lower than 10,000 feet, crewmembers delayed the decision to eject and continued efforts to recover the aircraft. "We finally ejected the capsule at 1,500 feet above ground level," Reynolds said. "If we had waited one more second, this briefing would probably not happen."

The B-1A crashed tail-first with about 90,000 pounds of fuel aboard, some 22 miles northeast of Edwards. Because of a malfunctioning mechanism, the parachutes didn't reposition to allow the escape capsule to touch down softly on its inflatable landing bag. Instead, the module struck the ground at a steep nose-down angle, hurling the crew forward into the control panels.

In the incident Reynolds, the aircraft commander, sustained serious back injuries. Rockwell International (today part of The Boeing Co.) chief test pilot and mission co-pilot Tommie D. "Doug" Benefield died when his seat ripped away from the floor of the capsule due to the 40g impact forces. Flight-test engineer Capt. Otto J. Waniczek, who was not wearing his helmet or harness also suffered serious injury.

The Benefield Anechoic Facility at Edwards, used for electromagnetic testing of aircraft and avionics, is named for Benefield. The B-1 crew escape capsule system was abandoned following construction of the first three B-1A prototypes. The fourth B-1A and production B-1B bombers were equipped with individual ejection seats for all crewmembers.

In his presentation, Reynolds focused on lessons learned from that accident and how those lessons could be applied to current flight-test programs. One lesson learned was the importance of crew composition. In this case, the least experienced pilot was assigned as aircraft commander with the most experienced crewmember as co-pilot. This inequity impacted efficient cockpit resource management.

In addition, it was a common occurrence during the test mission for the center-of-gravity warning light to flash. It did so often enough that ignoring it had become routine - a situation Reynolds described as "warning light fatigue." In retrospect, that highlighted another area of concern: communication. The center-of-gravity issues appeared frequently, but the crew didn't discuss them and failed to properly interpret what the aircraft was trying to communicate to them.

Not all of the problems had originated in the cockpit. For this flight, a less experienced mission planner had arranged the test-point sequence.

"Organization of flight objectives is important in carrying out a mission," Reynolds explained. Additionally, between two test points, flight controllers left their mission control stations for a brief meeting, leaving no one to monitor the center-of-gravity values on telemetry monitors and so another opportunity to warn the crew was lost. Following the mishap, control room procedure changes were implemented to prevent a similar incident in the future.

As pilot-in-command, Reynolds took full responsibility despite the fact that there were clearly a number of factors involved that were outside his control. "We skipped a step that we always took, and that gross mistake had dire consequences," he said, adding that the loss of a multimillion dollar aircraft was overshadowed by the loss of a highly valued member of the test community who had been his friend and mentor.