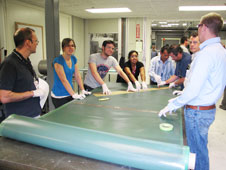 Workshop participants interpreted detailed drawings and used ply templates to cut material for the wing leading edge. (Photo courtesy Ed Swan) › View Larger Image Design and fabrication of parts made from composite materials are becoming increasingly important. At Dryden, one group has worked to unite people representing different disciplines in an effort to explain Dryden's capabilities and how to work together to get the job done.

At the core of the effort was NASA intern Alex Zelhofer, here as part of his Aeronautics Mission Directorate scholarship package, and his mentor, Matt Moholt. They worked together to develop a plan and a method for achieving that plan to immerse people in the intricacies and labor-intensive nature of making composite material parts.

Moholt, who also heads the Dryden Composites Working Group, asked Zelhofer to design a fun and interesting composite material part or assembly project in which people could create and learn in a hands-on workshop. One part of the workshop was aimed at explaining newly proposed processes for developing composite structures at Dryden, but the second part was a hands-on project.

"After some brainstorming, Matt and I settled on a four-foot-span wing design, and I ran with the idea. My goal was to produce molds for people so they could create parts in this workshop," Zelhofer said.

However, the goals for the wing went beyond a hands-on project to educate people, Moholt said. The wing is intended to serve as a ground test article for researchers' use in examining the properties of a composite wing, he added. 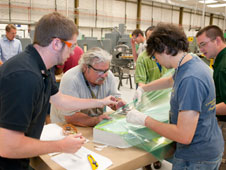 Alex Zelhofer, at left, helps Ronald Strong, Otto Schnarr and Devin Boyle apply vacuum bagging material to the mold, which will then be placed in the oven for curing. (NASA Photo by Tom Tschida) › View Larger Image Layering the carbon fiber material in the molds created the parts, he added. In addition to setting up the workshop, Zelhofer also led one of the teams in making a wing skin.

"I think the event was a great success because those who attended the workshop gained knowledge about composites and seemed to have some fun," Zelhofer said. "The most rewarding part of my project was seeing others finding composites as amazing and tricky to deal with as I do. I have to laugh because my team had some mishaps, but those mistakes were key to understanding how hard it is to work with composites and that designing a good mold is crucial."

Throughout the project, Zelhofer worked very closely with Experimental Fabrication Branch engineering technicians Eric Nisbet and Jeromy Robbins to make sure the composite parts' mold designs were easily manufactured. Branch chief Ed Swan also facilitated setting up the workshop and permitted the shop to be the site of the work.

"I can't say all my designs were easy to make, but the shop guys made it happen, and I owe them a big thank you. Even more so, I would like to thank the shop as a whole for shutting down for a small period of time to let Matt and me conduct the hands-on composite workshop," Zelhofer said.

The project was of value to the Experimental Fabrication Branch as well, which had an opportunity to showcase Dryden's composite-materials capabilities, Robbins added.

"It [the workshop] helps the hashing-it-out process in designing parts," he said. "Sometimes they ask for things that can't be built. It's easier once they understand what the physical limitations are of the composite part.

"On the other hand, the workshop also showed people what is possible with composites. A lot of these guys who know metal think of composites as a black art, but they can be used for more than what they are using it for."

He also mentioned the value of having two sessions.

"The interaction was a good thing, and it allows an open door where they already have a good relationship with us. You can prevent a lot of headaches by stopping the wrong paths and starting the right ones," Robbins said.

The experience was a good one for Zelhofer, who said he learned a lot.

"The hardest part of my internship was adjusting to real-life engineering problems. In school, you are handed a new textbook problem every day and if you mess up, it's only a grade. In my internship, if I messed up it would affect a lot of people, money and a dozen other factors. I was lucky to have my mentor Matt and others such as Craig (Stephens) and Larry (Hudson) to help mentor me," Zelhofer said.

Design freedom in creating parts with composite materials is almost limitless, and teaching participants about that freedom was one of the workshop goals, Moholt said.

In the near future, when the next workshop comes together, Moholt said he hopes to continue the dialogue and learning that resulted from this experience.