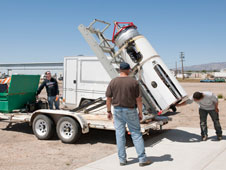 The Tom Tschida photo shows the Masten staff preparing their rocket for transport to their test site. (NASA Photo)
› View Larger Image When Masten Flight Systems of Mojave, Calif., launches a NASA payload later this year with its Xaero reusable launch vehicle, it will mark the beginning of a new era in NASA-industry partnership as the Flight Opportunities program takes flight.

Masten won the NASA-funded Lunar Lander Challenge in October 2009 and demonstrated the first-ever vertical takeoff and landing vehicle in-air engine re-light in May 2010. Masten plans for initial flights to take place at the company’s 200,000-square-foot test area at the Mojave Air and Space Port. The Xaero vehicle is a reconfiguration of the company’s Xoie platform, which won the Lunar Lander Challenge.

Masten officials are confident they will meet the conditions of the $250,000 contract NASA awarded them for launching NASA payloads to required test conditions, said John Kelly, Dryden Flight Opportunities program manager. In fact, NASA has guaranteed payment for launch services only when they have been successfully rendered. 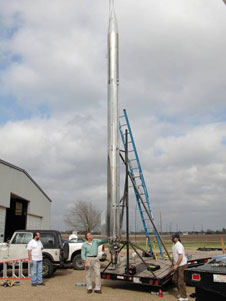 SuperMod was severely damaged during a flight test in June. Company officials decided that rather than continue with a vehicle that is now part of the company’s legacy, they would put all attention and resources into development of a Suborbital Transport Inertially Guided reusable rocket program, which is “going very well,” said Neil Milburn, Armadillo vice president of program management.

Success in the development of the STIG family of rockets – STIG A-II is under construction and an inaugural flight is anticipated later this summer – will make the company competitive in future Flight Opportunity contracts, Milburn said.

Challenges have delayed both Masten and Armadillo, but that’s to be expected in a nascent industry experiencing many of the same growing pains that characterized early development of the airplane, Kelly said.

The program is fashioned after the successful Kennedy Space Center, Fla., launch services contract. Both contracts rely on companies to have the ability to provide the services NASA needs.

“We are like a broker in that we are looking for payloads and flight platforms for achieving the technical benefits we want,” Kelly said.

Meeting of the minds 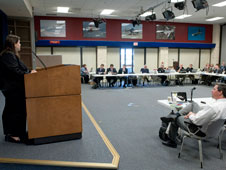 Michelle Murray of the FAA Commercial Space Transportation office spoke to representatives of aerospace firms Jan. 25 during a Flight Opportunities Program Industry Day at Dryden. (NASA Photo / Tom Tschida) › View Larger Image Before the first request for proposals had been fully developed, Flight Opportunities officials met at Dryden in January with suborbital reusable launch vehicle providers and payload integrators during an Industry Day. The goal of the event was to determine which companies were interested in providing services and to convey to the industry NASA’s intended direction on acquiring commercial launch services, Kelly said.

Representatives of more than 20 aerospace firms met with Flight Opportunities officials. In addition to companies learning about NASA’s plans, company representatives were given an opportunity to comment on the request for services that NASA planned to issue.

“We considered the feedback from industry, and we clarified a few items and made a few adjustments prior to releasing the request for proposals,” he said.

Also at that event, Steve Meier, director of the Cross-Cutting Demonstrations Division of NASA’s Office of the Chief Technologist, stressed the partnership approach that NASA seeks to take with commercial launch vehicle firms. Michelle Murray of the Federal Aviation Administration Office of Commercial Space Transportation outlined FAA licensing and the commercial-launch approval process. 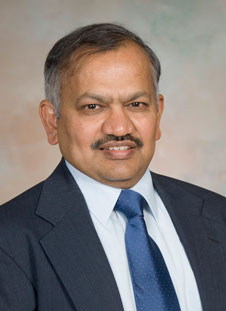 Laguduva Kubendran
(NASA Photo)
› View Larger Image Officials said they hope the new approach will lead to significant cost savings to NASA as reusable launch vehicle technology matures. In addition, they hope the research that will take shape is inspiring to students and will result in technology development of benefit to the nation.

Unlike past development efforts, in which NASA has contracted for a vehicle and then paid for its operation to achieve agency goals, the Flight Opportunities program is structured to enable NASA to use commercially available vehicles for its own research and provide opportunities for researchers across the nation, Kelly said.

Flight-testing is expected to reduce risk inherent in the use of emerging technologies, procedures and overall space operations by demonstrating application in a relevant environment. A measure of program success will be the extent to which it can infuse new technologies into NASA missions while encouraging development of commercial space services as well as a customer base for the emerging industry.

The commercial suborbital flight services offer access to a flight environment that provides 3-4 minutes of microgravity during which technology payloads can be tested. Also as part of the program, technology payloads will be tested on parabolic aircraft flights that can simulate microgravity and the reduced gravity environments of the moon or Mars, with the goal of maturing applications for future space missions. 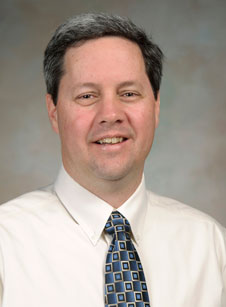 To make it easier for NASA to broker deals with scientists and researchers seeking launch services and the companies that provide them, the agency issued a request for proposals, which closed in June, seeking companies to provide future launch services for the next two years.

Each company chosen is guaranteed minimum funding of $10,000 and will be able to compete for launch payloads provided through NASA’s Flight Opportunities office. Total funding to be made available through the two-year program is $10 million and will center around three flight levels, all of which are suborbital, Kelly said.

It’s expected the first contract awards will be made before the end of September. Some of the flight opportunities that will be funded will include experiments aimed at advancing science, technology and education.

In May, Flight Opportunities officials announced the selection of 16 payloads for flight on the commercial Zero-G parabolic aircraft and two suborbital reusable launch vehicles. The flights provide opportunities for space technologies to be demonstrated and validated in relevant environments.

Payloads and teams from 10 states and the District of Columbia were selected from among applications received in response to a NASA call issued in December. Of the payloads, 12 will ride on parabolic aircraft flights, two on suborbital reusable launch vehicle test flights and two on both platforms. 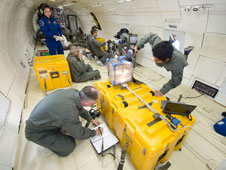 University of Florida students maximize their exposure to zero gravity to conduct a flight experiment aboard the Zero-G parabolic aircraft. (NASA Photo) › View Larger Image The commercial Zero-G aircraft payloads will be flown during a weeklong campaign from Houston’s Ellington Field in mid-July and another flight series in September. The suborbital reusable launch vehicle payloads will be flown on Masten’s Xaero.

Proposals for payloads to be flown on the commercial vehicles will be accepted until Dec. 31, 2014. Dryden’s Flight Opportunities office manages the commercial suborbital reusable launch vehicle contracts. Payload activities for the program are managed at Ames Research Center. A complete list of the 16 proposals chosen and more information on the Flight Opportunities program are available at http://flightopportunities.nasa.gov.

Four more parabolic aircraft flight opportunities are set for 2012. These flights will include microgravity experiments in environments that simulate near zero gravity, the gravity of the moon and the gravity of Mars.

Pilots will fly the parabolic profiles for brief periods of reduced gravity while the researchers tend to their experiments in the aircraft cabin. Each flight will permit as many as 60 reduced-gravity opportunities.

Whether the opportunity is provided on a new launch vehicle or on an aircraft, the Flight Opportunities office strives to break new ground in technology development as it forges new partnerships with commercial flight providers.