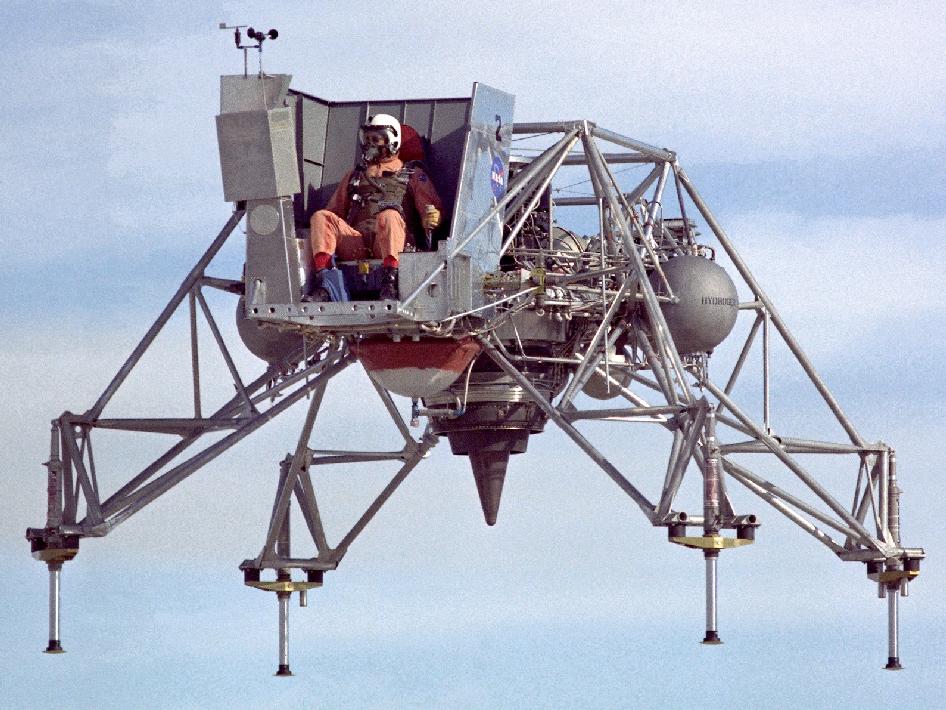 Once NASA had been challenged to put a man on the moon and return him safely to Earth, attention turned to a delivery system for the mission. Less visible to the nation was how to resolve the matter of landing on the moon itself and then leaving it safely. Simultaneously but independently, engineers at the Flight Research Center (now Dryden) and Bell Aircraft Co. of Buffalo, N.Y., conceived of a free-flying machine meant to replicate the lunar environment - that is, the absence of an atmosphere, and one-sixth Earth's gravity.

NASA awarded Bell the contract to build two Lunar Landing Research Vehicles that were then sent to the FRC for research. The LLRV was built of lightweight aluminum tubing for reduced weight. A double gimbal held a General Electric CF700 fanjet engine in vertical position. It had small hydrogen peroxide thrusters at the four corners, and a cluster of larger thrusters anchored to the frame around the double gimbal.

For nearly three years pilots and engineers flew the LLRVs in various configurations, experimenting with thrust levels to determine settings ideal for replicating the Lunar Module's controls. Once a pilot reached altitude (200-300 feet), he engaged the lunar simulation mode. The computers weighed the vehicle, reduced engine thrust to compensate for only five-sixths Earth's gravity, and unlocked the engine gimbals.

All the Apollo spacecraft commanders trained in a Lunar Landing Training Vehicle - the training version of the research vehicle. Each commander credited the LLTV for making the actual lunar landing familiar. Perhaps the most remarkable feature of an extraordinary aircraft was the control system: engineers chose an analog fly-by-wire system with no mechanical backup. It became the first genuine fly-by-wire aircraft, and its success led directly to Dryden's 1970s-era digital fly-by-wire experiments with an F-8.