The board that investigated the loss of the remotely operated Helios Prototype aircraft during a test flight last summer has released its final report.

The board determined that the mishap resulted from the inability to predict, using available analysis methods, the aircraft's increased sensitivity to atmospheric disturbances such as turbulence, following vehicle configuration changes required for the long-duration flight demonstration. 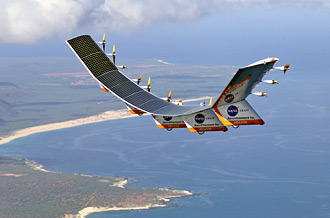 The Helios Prototype aircraft involved in the mishap was a proof-of-concept solar electric- powered flying wing designed to operate at high altitudes for long duration flight. The failure occurred during a flight from the U.S. Navy's Pacific Missile Range Facility (PMRF) on the Hawaiian island of Kauai on June 26, 2003.

The propeller-driven aircraft had been flying under guidance of ground-based controllers from AeroVironment, Inc., of Monrovia, Calif., the plane's builder and operator, with assistance from NASA Dryden Flight Research Center personnel. The aircraft was destroyed when it sustained structural failure and fell into the Pacific Ocean. No other property damage or any injuries occurred as a result of the mishap.

At about 10:36 a.m., the aircraft again experienced normal turbulence and transitioned into an unexpected, persistent high wing dihedral configuration. As a result, the aircraft became unstable, exhibiting growing pitch oscillations. Airspeed deviated from the normal flight speed, with the deviations rapidly increasing with every cycle of the oscillation. The aircraft's design speed was subsequently exceeded. The resulting high dynamic pressures caused the wing leading edge secondary structure on the outer wing panels to fail and the solar cells and skin on the upper surface to rip off. The remotely piloted aircraft came down within the confines of the Pacific Ocean test range, northwest of PMRF.

The report is available on the Internet at:

Meanwhile, a NASA-industry planning team is establishing a "technology development roadmap" that will set the course for further development of critical high-altitude, long-endurance (HALE) unmanned aerial vehicle (UAV) technologies and capabilities. That roadmap will take into account the findings and recommendations of the Helios Mishap Investigation Board. The roadmap will address many technology areas, such as hydrogen fuel, regenerative and primary fuel cell systems, emissionless electric propulsion, multi-function airframe structures and autonomous mission management. Based on the roadmap, a revised set of research projects under NASA's Vehicle Systems Program is being developed. These new projects are expected to lead to even more revolutionary HALE UAV aircraft capable of flying routinely as reliable "atmospheric satellites" on critical scientific and civil missions by the 2010—2015 time period.

Although NASA's plans for development of these technologies were originally based upon the availability of the Helios Prototype as a test aircraft, the loss of the Helios gives NASA the opportunity to take a broader view of the technology and aircraft development strategies and goals, and several options are under consideration.

The Helios Prototype was on the second in a series of shakedown flights leading toward a planned 40-hour long-endurance mission with the aid of an experimental fuel cell system for night flying when the mishap occurred. The fuel cell system had not yet been turned on when the accident occurred, and was lost when it sank following the aircraft's ocean impact.

In August, 2001, the lightweight solar-electric aircraft had reached an official world record altitude for non-rocket powered aircraft of 96,863 feet during a maximum-altitude flight from PMRF, the first of two major flight milestones set for the craft by NASA under ERAST.

Since the record altitude flight, AeroVironment, Inc., designer and manufacturer of the giant flying wing, has focused on development of the experimental fuel cell-based electrical power system that would allow flight at night to meet the second milestone. The firm is working on two non-regenerative versions of the system, as well as a regenerative version that would make continuous flight spanning several months possible in the future.

The Helios Prototype first flew during six low-altitude airworthiness validation flights on battery power at NASA Dryden in the fall of 1999. The aircraft then underwent major upgrades, including the installation of high-efficiency solar cell arrays across the wing, navigation and emergency lights, improved avionics and more efficient propellers, prior to its record altitude flight in 2001.