NASA Dryden's highly modified NF-15B testbed aircraft No. 837 has begun a series of flights in the next phase of the Intelligent Flight Control Systems (IFCS) research project. 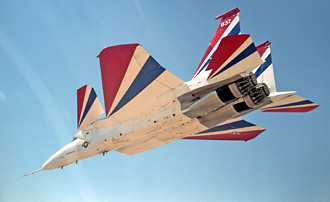 These IFCS flights are being flown to reduce risk for two sets of research missions scheduled for next year. They will focus on calibration of newly-installed instrumentation and air data systems that are intended to provide better measurement data, as well as refinement of the parameter identification/estimation algorithm, which requires accurate measurements of the inputs and the response of the aircraft.

IFCS is designed to incorporate self-learning neural network concepts into flight control software to enable a pilot to maintain control and safely land an aircraft that has suffered a major systems failure or combat damage.

Flight evaluation of first- and second-generation self-learning neural network control software is expected to occur in 2003. Preliminary flight tests of an IFCS neural network that was pre-trained to the NF-15B's aerodynamic database were flown in Spring 1999.

Dryden's NF-15B #837 last research role was in the Advanced Control Technology for Integrated Vehicles (ACTIVE) project, which concluded in 1999. In addition to its distinctive red, white and blue paint scheme, the aircraft is distinguished by its close-coupled canards mounted on the engine inlets just ahead of the wing and by its 360-degree thrust-vectoring engine exhaust nozzles.