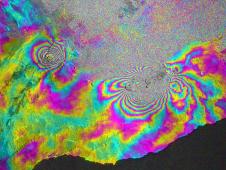 This satellite interferometric synthetic aperture radar image of a large fissure eruption on the east rift zone of Hawaii's Kilauea volcano that occurred on March 5, 2011 was created by Paul Lundgren of NASA's Jet Propulsion Laboratory. This image depicts the relative deformation of Earth's surface at Kilauea between Feb. 11, 2011 and March 7, 2011. For further details, visit: http://photojournal.jpl.nasa.gov/catalog/PIA13910 PALMDALE, Calif. - The Kilauea volcano that recently erupted on the Big Island of Hawaii will be the target for a NASA study to help scientists better understand processes occurring under Earth’s surface.

A NASA Gulfstream-III aircraft and its specialized instrumentation is scheduled to depart Sunday, April 3, from the Dryden Aircraft Operations Facility in Palmdale, Calif., to the Big Island for a nine-day mission using a synthetic aperture radar developed by NASA’s Jet Propulsion Laboratory in Pasadena, Calif.

The Uninhabited Aerial Vehicle Synthetic Aperture Radar, or UAVSAR, uses a technique called interferometric synthetic aperture radar that sends pulses of microwave energy from the aircraft to the ground to detect and measure very subtle deformations in Earth's surface, such as those caused by earthquakes, volcanoes, landslides and glacier movements.

As the G-III flies at an altitude of about 41,000 feet, the radar, located in a pod under the aircraft’s belly, will collect data over Kilauea. The UAVSAR’s first data acquisitions over this volcanic region took place in January 2010, when the radar flew over the volcano daily for a week. The UAVSAR detected deflation of Kilauea’s caldera over one day, part of a series of deflation-inflation events at Kilauea as magma was pumped into the volcano’s east rift zone.

This month’s flights will repeat the 2010 flight paths to an accuracy of within five meters, or about 16.5 feet, assisted by a Platform Precision Autopilot designed by engineers at NASA’s Dryden Flight Research Center on Edwards Air Force Base, Calif. By comparing these camera-like images, interferograms are formed that reveal changes in Earth’s surface.

Between March 5 and 11, 2011, a spectacular fissure eruption occurred along the east rift zone. Satellite radar imagery captured the progression of this volcanic event. 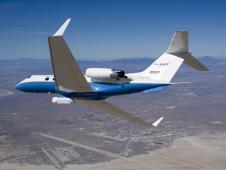 The UAVSAR underbelly pod is in clear view as NASA's Gulfstream-III research aircraft banks away over Edwards AFB during aerodynamic clearance flights in 2007. (NASA / Lori Losey) “The April 2011 UAVSAR flights will capture the March 2011 fissure eruption surface displacements at high resolution and from multiple viewing directions, giving us an improved resolution of the magma injected into the east rift zone that caused the eruption,” said JPL research scientist Paul Lundgren.

This injection of magma takes the form of a dike, a thin blade-like sheet of magma extending from the surface to several kilometers depth with an opening of only a few meters.

“Our goal is to be able to deploy the UAVSAR on short notice to better understand and aid in responding to hazards from Kilauea and other volcanoes in the Pacific region covered by this study,” Lundgren added.

For more on UAVSAR, visit: http://uavsar.jpl.nasa.gov

Photos and imagery to support this release will be available at: http://www.nasa.gov/centers/dryden/news/newsphotos/index.html