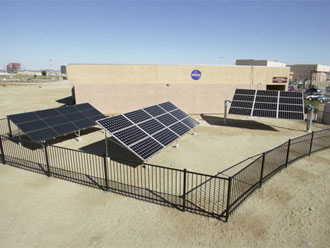 A state-of-the-art solar array is providing a unique opportunity to demonstrate the latest in high-efficiency solar cells available for terrestrial use at a demonstration site at NASA's Dryden Flight Research Center at Edwards Air Force Base, Calif.

Manufactured by SunPower Corporation of Sunnyvale, Calif., the A-300 silicon cells were derived from those developed for the NASA / AeroVironment Helios and Pathfinder-Plus solar-powered aircraft under the now-concluded Environmental Research Aircraft and Sensor Technology (ERAST) program. They are considered to be the most advanced photo-voltaic cells available for terrestrial applications.

The experimental site consists of two fixed-angle solar arrays and one single-axis sun-tracking array. Together they produce up to five kilowatts of direct current power on a sunny day, which is equivalent to powering two or three average California homes. The sun-tracking array tilts to follow the sun using an advanced "real-time" tracking device rather than normal pre-programmed mechanisms. One of the fixed arrays contains standard less-efficient cells, and is being used as a baseline comparison for the newer fixed-cell array. According to SunPower, typical commercial-grade solar cells are in the range of 12 to15 percent efficient at converting sunlight to electricity, while the new cells are 20 percent efficient, or up to 50 percent better than the older technology.

The efficiency improvement is due largely to the routing of cell electrical connections behind the cells, which was required in the original design for the solar-powered aircraft to maximize the limited space available atop the wings.

"It is a grid-connected system, so it is putting power back into the electrical grid," stated Jon Ferrall, NASA Dryden electrical engineer, who managed the installation of the solar array demonstration site. "The system is providing significant power to the 7,870 square foot Public Affairs and Commercialization building here at Dryden."

The demonstration is comparing the potential advantage of the tracking array over the fixed array, verifying the effectiveness of the dirt-repellant coating over the protective glass housing the solar cells, and the effect, if any, of dust and dirt on the arrays. Array efficiency is monitored remotely on a computer.

Should the demonstration be successful, it would be a major step toward transferring the technology to the commercial market, allowing for mass production of these high-efficiency solar cells for a variety of residential, business and governmental applications.

Charlie Gay, chief array installer of SunPower, said they have been able to actively predict the output of the system.

"SunPower's ability to predict energy delivery over the span of the past year is attributed to the modules and system working well," Gay said.

Jennifer Baer-Riedhart, NASA Dryden's project manager for the solar demonstration site, estimated that the life expectancy is at least 25 years.

A second phase of the demonstration will consist of establishing an Internet web site that will allow the public to view "real-time" information on the Dryden solar demonstration site, as well as other solar array sites that are planned for construction in Hawaii and Arizona.

Long-term plans include construction of a solar "farm" at NASA Dryden that would power up to one-third of the center's electrical power needs.

The solar power demonstration site was funded through a technology commercialization allocation from NASA's ERAST program at a cost of around $130,000. It was constructed by Renewable Energy Concepts Inc. of Los Osos, Calif.

NOTE TO EDITORS: A publication-quality photo to support this release is available on the NASA Dryden Internet web site photo gallery by pasting the following URL into your browser: http://www.dfrc.nasa.gov/Gallery/Photo/Places/HTML/EC03-0283-20.html