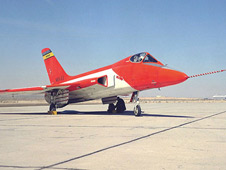 As part of NASA's 50th anniversary celebration, a 'Where are They Now?' Web page has been created so that viewers can learn where they may see on display some of the most historic aircraft ever flown:

An example of the aircraft to be found on the Web page is the Douglas F5D-1 Skylancer. In May 1970, one of two F5D-1 Skylancers flown by NASA's Dryden Flight Research Center was retired and is loaned to the Neil A. Armstrong Museum in Wapakoneta, Ohio.

Using this aircraft, then-NASA Flight Research Center test pilot and future first man on the moon Neil Armstrong developed and flew a launch abort flight maneuver for the U.S. Air Force's planned X-20 Dyna-Soar space plane. The maneuver was designed to clear the Dyna-Soar from its Titan III booster in the event of an emergency and put the vehicle on a safe approach to a runway landing.