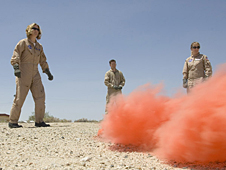 When flight crews have to bail out or eject from a crippled aircraft, they have to know how to survive once they hit the ground or water.

To ensure they are up to date on their survival skills, personnel on flight status at Edwards Air Force Base and NASA's Dryden Flight Research Center recently teamed up for refresher training in land and water survival to prepare them to survive an ejection or bailout over the ocean or a remote area on land.

After academic instruction in the morning, personnel then spent the afternoon practicing what they were learning in the Oasis Aquatic Center pool or out in the desert during the two-day training sessions. Under controlled conditions, the flight crews were placed in situations similar to what they might encounter in an actual emergency. 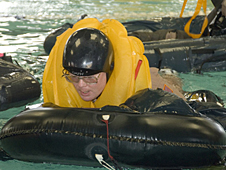 NASA Dryden life support chief Bobby McElwain said pilots undergo full training at a survival school early in their careers, have annual discussions about survival and are required to undergo refresher training drills related to desert and water survival every five years. Although Edwards is located in the desert, missions flown over the Pacific Ocean are commonplace. 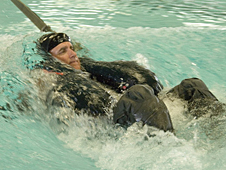 "[Pilots] are so accustomed to the desert environment that they’re not thinking about water," McElwain remarked. "We have to drill it into their heads all the time when they come through for life support training: Don’t forget you can find yourself in a water survival situation."

NASA Dryden research pilot Dick Ewers understands the value of these drills after hearing first-hand from pilots he’s known who have had to eject from stricken aircraft and who said they might not have survived without the training. 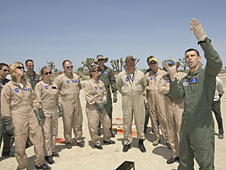 "Luckily, we were doing this in a calm, warm swimming pool, and for only an hour outside in the desert and on a cool day," Ewers noted. "Imagine trying to find and climb into a raft at night in the open ocean where the water is less than 60 degrees and you’re really cold, or trying to get your act together after parachuting down in the desert when it’s over 100 degrees and you broke your arm in the ejection.

"Knowing what to do and that you can do it will make the difference."