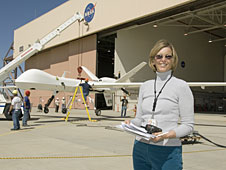 Flight operations engineer Kathleen Howell participated in a critical lift of NASA's Ikhana for a functional check of new computer hardware. NASA photo. "Did you get any inverted time this weekend?"

The question posed to NASA flight operations engineer Kathleen Howell was in reference to practicing her skills as an aerobatic pilot, one of her favorite weekend pastimes.

"In 2004, I decided it was time to learn to fly," Howell said. "I had been flying with my husband for years. We had a perfectly good airplane sitting on the ground, the children were grown and it was time to pick up the flying that I began years before."

Howell earned her private pilots' license in March 2005 and now holds a commercial pilots' certificate with an instrument rating.

Howell was a stay-at-home mom to three children prior to joining NASA. With the children grown and involved in their own careers, she applied for a position at the NASA Dryden Flight Research Center at Edwards, Calif. She felt Dryden was a natural fit since she was a native of Southern California. Her father had been an aeronautical engineer working in the local area. Husband John is a test pilot and flight test engineer for a major aerospace company.

Her first civil service position at Dryden was as a software test engineer. She was responsible for the design and execution of software acceptance tests for Dryden's Mission Control Center.

Recently, Howell has been assigned to Ikhana, a civil version of the Predator B aircraft. She supported mission planning for Ikhana's Western States Fire Mission flown in late summer and early fall 2007. In October, Ikhana carried an infrared sensor that took images of wildfires burning in Southern California and provided those images to incident commanders on fire lines.

Howell earned a Bachelor of Arts degree in mathematics from California State University, Northridge. She has teaching experience in elementary through high school.

She recommends that young women study math because it opens "lots and lots of possibilities."

"Young ladies should pursue any passions wholeheartedly. They should follow their dreams," encouraged Howell.