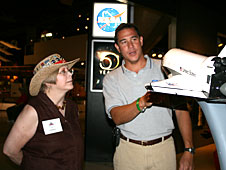 NASA engineer Tony Ginn shows the space shuttle to EAA AirVenture Museum volunteer Linda Meyers in the NASA 50th anniversary exhibit in the museum. Photo by Kathy Barnstorff. Tony Ginn comes from a flying family. He carries on that tradition at work and at home.

"My father was a former Air Force pilot and flight-test engineer. He built and flies a Thorp T-18," says Ginn. "My mom flies a Thorp T-211 Sky Skooter. My brother is a United Airlines standards captain and flies a Thorp T-18. My grandfather was executive vice president of the aircraft division (and then research and development) for Continental Engines, and my brother in-law is a Southwest 737 captain. So I have lived and breathed aviation from childhood."

The 44-year-old is the chief of the flight operations engineering branch at NASA's Dryden Flight Research Center at Edwards Air Force Base, California. His job is to oversee employees who work with experimental flight research aircraft. He's also a member of the EAA and has been since he graduated from college more than 20 years ago.

"I've held every officer position, except treasurer, in EAA Chapter 49 in Lancaster, California," says Ginn. "The chapter is about 150 members strong. We have an aircraft target-rich environment in Antelope Valley and draw people from NASA Dryden, Edwards Air force Base, Mojave Airport/Spaceport, and Palmdale U.S. Air Force Plant 42. Some of our members are SpaceShipOne astronauts."

He says it's the aviation and the people that keep him involved in EAA. "I've always been a hands-on type of person, and I've wanted to associate with similar people."

Ginn owns four airplanes and lives on a sky park. His flyable aircraft include a Thorp T-18, a 1953 Cessna 170B, and a 1947 Aeronca Super Chief. His future project, which Ginn says he pretty much quit working on when he started building his house five years ago, is a Pitts Special aerobatic biplane.

Ginn has flown himself to Oshkosh eight times, the first time when he was 17. "I was 17. My brother was 18," says Ginn. "We headed out for three and a half weeks on our own. We split the flying duties."

He adds he has brought all three of his airplanes to the air show. Sometimes his wife, who is also a pilot and a NASA structural dynamics engineer, comes with him. Not this year, though. She's expecting the couple's second child.

Their first child, 2-year-old Autumn, is already a veteran aviator. "We had our daughter flying at two and a half months," says the proud father. "She's got her own logbook, and we're keeping track. She's got 35 hours since she was born."

Autumn's not the only child who has benefited from Tony Ginn's love of the air. He has given rides to more than 100 EAA Young Eagles. "I love seeing them light up with their first airplane flight seeing their eyes as we lift off, showing them the freedom and utility of it all," adds Ginn.

Ginn's eyes light up too when he talks about flying, as visitors can see for themselves if they run into him this week at the NASA exhibit at the EAA AirVenture Museum.

By Kathy Barnstorff
NASA Langley Research Center
› Back To Top