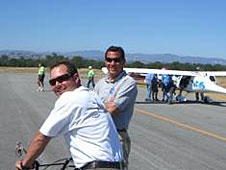 NASA awarded $97,000 in prizes at the challenge, which was managed by the Comparative Aircraft Flight Efficiency, or CAFE, foundation located at the airport.

"The goal of the event was fairly simple; provide an avenue for inquisitive aviators/inventors to develop quieter and more fuel efficient general aviation aircraft," said Tony Ginn, head of the flight operations engineering branch at NASA Dryden. "Given some very important societal factors such as the high cost of fuel, impacted freeways and housing expansion encroaching on local airports, it's more important than ever that we provide a fun competition with incentives for much-needed technology development."

Although there were only four teams in this year's event, it provided an interesting mix of aviators, including a few from around the globe. The American participants were joined by two Australians and three Slovenians.

The NASA Dryden contingent served as jurors to ensure that the contest was being run in a fair and effective manner. The jurors took notes on what was, and was not, working well and met to discuss how the event could be improved in the future. There were some areas, such as test equipment reliability issues, in which the experienced NASA team helped event coordinators.

In addition, the NASA team interviewed competition entrants on the modifications made to their aircraft, evaluating the changes for possible integration into future aircraft.

"The event this year encountered a number of challenges, from test equipment failures to operations complications, but was able to at last complete the event thanks in large part to the amazing efforts and long hours put in by the CAFE volunteers," said Jonathan Barraclough, a NASA Dryden flight systems engineer. 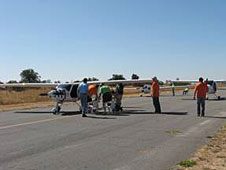 Crews prepare a Pipistrel Virus from Slovenia, Flight Design's CTsw, and an Urban Air Lambada from the Czech Republic for the CAFE 400 race. (NASA photo) While there, the NASA Dryden team also met with the other NASA attendees from NASA Headquarters and the NASA Langley Research Center to discuss ideas on how to simplify and improve the competition. Among ideas presented were opening it to industry and college teams, increasing the number of entrants, and refocusing the competition on its overriding goal of increasing general aviation aircraft efficiency and reducing its environmental impact, both of which will open the door to increasing the role general aviation plays nationally for transportation.

The General Aviation Technology Challenge is one of seven NASA technology prize competitions. The prize program began in 2005 and is known as Centennial Challenges, in recognition of the centennial of powered flight. In keeping with the spirit of the Wright brothers and other American innovators, the Centennial Challenge prizes are offered to independent inventors who work without government support, including small businesses, student groups and individuals.

The prize competitions are targeted at a range of technical challenges that support NASA's missions in aeronautics and space. The goal is to encourage novel solutions from non-traditional sources. For the program, NASA provides the prize money while each of the competitions is managed by an independent allied organization at no cost to NASA.

For more information on the program, visit: http://centennialchallenges.nasa.gov