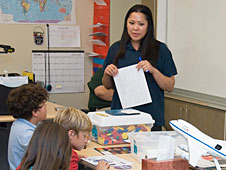 “NASA is about space, but it’s also about aeronautics,” said MaryAnn Harness, public outreach specialist and exhibit coordinator at NASA's Dryden Flight Research Center at Edwards, Calif. Harness was one of three NASA representatives who were in Albuquerque, N.M., to provide NASA aeronautics information to attendees of the Albuquerque International Balloon Fiesta. They spoke with the students in the afternoon after the ballooning events.

Students already knew about the space shuttles and NASA’s space mission, but they were equally enthusiastic to learn about the agency’s airplanes.

That enthusiasm grew when NASA Dryden life support technician Jim Sokolik asked students about the high-altitude pressure suit he brought. Students watched as Sokolik instantly inflated the suit with a pump and explained how the lack of oxygen and pressure 11 miles up would cause pilots to pass out without pressure suits.

“There’s not enough pressure to keep air in your lungs,” he said.

At Dryden, pilots of NASA's high-altitude ER-2 environmental science aircraft, a civil variant of the military U-2 reconnaissance plane, must wear such suits to survive in the harsh environment of high-altitude flight. 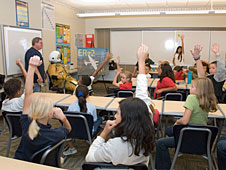 Fifth-grade students at Cielo Azul Elementary School in Rio Rancho, N.M. had plenty of questions for NASA Dryden life support technician Jim Sokolik during his presentation on high-altitude pressure suits. (NASA Photo/Tony Landis)
› View Larger Image “It happens in a quarter of a second – faster than you can blink,” he added.

Students asked him about what people eat at high altitude and how the pilot gets to it. A hole in the side of the helmet with a spring-loaded valve allows a straw to be inserted. Drinking is by straw and food is “eaten” from a tube that students were allowed to try. The students appeared to like the chocolate pudding that oozed from the silver tube.

Sokolik explained the suit is made of fire retardant Nomex and that a white mesh underneath is used to customize the suit for each pilot. It takes about 10 to 12 minutes to don the suit and pilots can wear it for up to 10 to 12 hours.

“Why is there a little ball in the front of the suit?” asked student Anthony Alvarado.

“When the suit inflates it generates a lot of energy," Sokolik responded. "Even if the force of inflation pushes the helmet to a position where they can’t see down, they can find the ball for the helmet adjustment. Their gloves inflate too and they might not even be able to easily feel the ball, but they know it’s there.”

To a question from student Maria Verdoren, Sokolik explained the suit and helmet were separate elements and air in the helmet is sucked out as fresh oxygen is pumped into the helmet.

Darlene Mendoza, of the Universities Space Research Association office at NASA's Ames Research Center in Northern California, gave a brief overview of the Stratospheric Observatory for Infrared Astronomy, or SOFIA, program. NASA's SOFIA aircraft is a specially modified Boeing 747 that will carry a German-built airborne infrared telescope, the world's largest.

“What happens if they run out of energy?” asked Valerie Harness.

Mendoza explained that unlike a space satellite, the SOFIA telescope is mounted in an aircraft, and it can return to Earth if it encounters challenges and can go back to complete the mission.