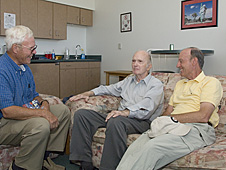 The first 1,000 fans attending the game also received a bobblehead doll in Dana's likeness, and artist Randy Barnicki presented Dana with a limited-edition print of his painting, "The Hypersonic X-15."

The first employee to be hired by the newly-created aerospace agency when it began operations on Oct. 1, 1958, Dana had a distinguished 40-year career in research flying and engineering at NASA Dryden, flying high-risk missions in the hypersonic X-15 rocket plane, the rocket-powered lifting bodies, and a variety of unique research aircraft.