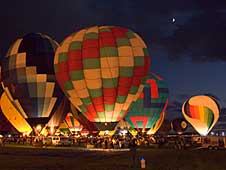 Colorful balloons light up for the Balloon Glow event at the International Balloon Fiesta as the moon peeks from behind the clouds. (NASA Photo/Tony Landis)
› View Larger Image
So what do some of the 800,000 fans of the Albuquerque, N.M., Balloon Fiesta events do when the action is over, out of sight, or called off due to weather? They head to exhibits such as NASA's, available through Oct. 12.

Weather temporarily caused a break in the action Sunday, and sporadically on Monday, but the NASA exhibit was available to offer a change of pace for attendees. The NASA exhibit focused on aeronautics and features items such as NASA’s 50th Anniversary, the SOFIA, a timeline of aeronautics, and how modern aircraft have benefited from NASA technology, said MaryAnn Harness, public outreach specialist and exhibit coordinator at NASA Dryden Flight Research Center. Dryden is located at Edwards Air Force Base, Calif.

For Marcos Gonzales, at least, and his daughter Renata, 5, the aeronautics message came through loud and clear. 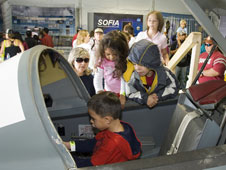 Visitors to the NASA exhibit had an opportunity to "fly" the T-38 simulator. (NASA Photo/Tony Landis)
› View Larger Image While Renata was sitting in a T-38 simulator cockpit, Gonzales said he has been to Edwards Air Force Base and seen the sleek Mach 3 Blackbird. He has passed his love of aviation to his daughter.

Dad and daughter also had an appreciation for the Stratospheric Observatory for Infrared Astronomy, or SOFIA aircraft. Information about the SOFIA program was available at the exhibit, which fired the Gonzales’ imaginations because of one of their hobbies.

“We have a telescope and binoculars at home and we look at the constellations. We also watch news on NASA missions,” Mendoza said.

The SOFIA is a specially modified NASA 747 that will carry the world’s largest airborne infrared telescope, which was built by Germany, a key U.S. partner in the venture. Darlene Mendoza, who is based at NASA Ames Research Center, Moffett Field, Calif., showed attendees an infrared camera and the differences between what can be viewed in visible versus infrared light. 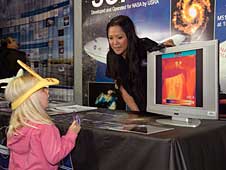 Darlene Mendoza of NASA's Ames Research Center shows a young visitor at NASA's SOFIA exhibit what she looks like through the lens of an infrared camera at the International Balloon Fiesta. (NASA Photo/Tony Landis)
› View Larger Image The infrared camera used in the SOFIA exhibit was of special interest to Arabella Pepin, who said she is considering a career in engineering.

“It was very interesting seeing myself on the screen, and it helped me see what my science teacher in eighth grade taught me about infrared light,” she said. “I thought it was interesting how a regular airplane was transformed to a laboratory that scientists will be able to use to see things in ways they could not see them in before.”

Assisting Harness in staffing the NASA exhibit is Kimberlee Buter, and representing the Innovative Partnerships Program office is Dryden’s Kim Lewis-Bias. Lewis-Bias is providing materials that showcase ways in which NASA technology may be found in everyday life.

Another part of the exhibit illustrated how pilots of high-altitude aircraft are protected from cold, thin air. Dryden life-support technician Jim Sokolik was on hand to demonstrate the suits’ use to Fiesta crowds. 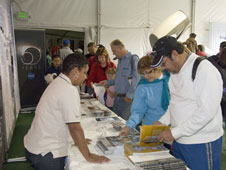 Dryden's Kim Lewis-Bias, who is representing the Innovative Partnerships Program office, hands out materials to visitors to the NASA exhibit. (NASA Photo/Tony Landis)
› View Larger Image Sokolik also has on display a retired full-pressure suit assembly like those ER-2 pilots must wear to survive in the harsh environment of high-altitude flight. The ER-2 is the civil variant of the military U-2 reconnaissance aircraft. NASA’s ER-2 aircraft are used for environmental sampling and atmospheric observation missions.

Brandon Clark, 8, was particularly interested in how pilots in high-pressure suits get a drink. Sokolik gave the boy a bottle with a long straw and had him poke it through a hole in the helmet.

“I learned that they can drink by sticking the straw through this hole,” Clark said, pointing to a hole in the helmet.

Another popular part of the NASA exhibit is a photo booth in which visitors can have pictures taken in an automated system that produces photos simulating the subject on the moon or on Mars.

Emily Anderson, a student at the University of New Mexico in Albuquerque, said the exhibit was simply out of this world. 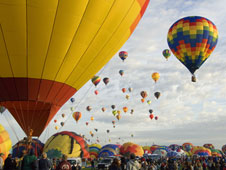 Albuquerque International Balloon Fiesta participants took advantage of good weather for the opening day of the event. (NASA Photo/Tony Landis)
› View Larger Image “I visited Mars and I have the photographic evidence. I’m doing a speech on astronautics and this will a good visual aid. It was my dream as a kid to be an astronaut,” Anderson said.

By Jay Levine
X-Press Editor
› Back To Top