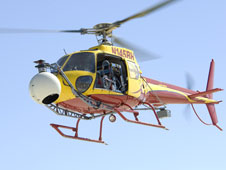 A sophisticated lidar device designed to measure descent velocity for future autonomous lunar landers projects from the nose of a helicopter during flight tests at NASA Dryden. (NASA photo / Tony Landis) High resolution photo An experimental light detection and ranging (lidar) device that has the ability to measure descent velocity for future autonomous robotic lunar missions was flight-tested Aug. 20-22 at NASA's Dryden Flight Research Center. Mounted in a gimbaled ball on the nose of a helicopter, the lidar device uses Doppler techniques to accurately measure the velocity of a descending spacecraft to enable accurate and controlled touchdown.

The flight tests were performed at NASA Dryden by the Jet Propulsion Laboratory's Autonomous Systems Division as part of the Autonomous Landing and Hazard Avoidance Technology (ALHAT) program led by the Johnson Space Center. NASA's Langley Research Center developed the Doppler lidar sensor that was the focus of the testing. JPL is the lead center for field testing and terrain analysis, hazard detection and terrain relative navigation algorithm development.

During the tests, the helicopter flew over two target areas 5 KM apart on the surface of Rogers Dry Lake adjacent to the compass rose near NASA Dryden and North Base at Edwards Air Force Base. Repeated back-and-forth tracks were flown at altitudes incrementally increasing from about 300 feet to 6,200 feet above the lakebed. The data was recorded on board and tagged with time and altitude information to allow post-flight processing. 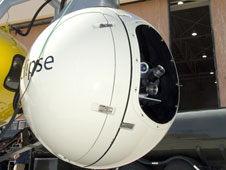 A variety of lenses used by the gimbal-mounted laser device are visible through the opening in its ball-shaped housing. (NASA photo / Tony Landis) High resolution photo Previous tests of similar equipment by JPL engineers at Dryden in April focused on its ability to detect potential hazards at a landing site for future autonomous robotic lunar missions. That device is designed to automatically recognize the location and topography of the desired landing site during its final descent to the surface, detect hazards such as craters or large boulders at the site, with the data interpreted in real time by a computer that adjusts the lander's trajectory to direct it to a safer landing spot.

Future testing in the five-year project will conclude with a full-scale test where the landing dynamics, simulated lunar environment, sensors and software are all present for a realistic test of all systems in real time.

› Read more on ALHAT
› Back To Top