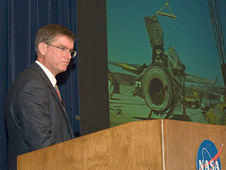 How the X-15 program handled adverse circumstances, including several crashes, was the central theme of author Dennis Jenkins historical colloquium presentation Oct. 24 at Dryden. NASA / Photos Tony Landis It's been called the most successful of the X-plane flight research programs, but the decade-long X-15 rocket plane hypersonic research program was not without its pitfalls.

The difference between the X-15 program's approach to adversity and setbacks in the 1960s and many high-profile aerospace research and development programs today, maintains author and aerospace engineering consultant Dennis Jenkins, was the can-do, fix-the-problem and go-fly-again attitude of the X-15's cadre of engineers and technicians.

Jenkins, author of the recently published "X-15: Extending the Frontiers of Flight," detailed his premise repeatedly during a colloquium presentation at NASA Dryden Oct. 24, the 40th anniversary of the 199th and last X-15 research flight. Jenkins words found ready acceptance among a group of veteran X-15 engineers, technicians and retired Dryden research pilot Bill Dana, who flew the last X-15 flight 40 years earlier, as well as about 200 Dryden employees who attended. 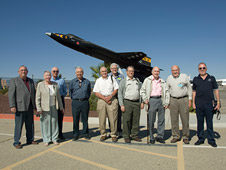 Among veterans of the X-15 program who reunited at Dryden on the 40th anniversary of the last X-15 flight were (from left) Johnny Armstrong, Betty Love, Paul Reukauf, Bob Hoey, Dave Stoddard, Dean Webb, Vince Capasso, Bill Dana (who flew the last flight), John McTigue and T.D. Barnes. Jenkins cited the comments of the late Scott Crossfield, an early X-plane pilot at what became NASA Dryden and the first pilot to fly the X-15 in 1959, on how the program faced technical setbacks: "We used judgment many times in lieu of hard knowledge." Jenkins contrasted that attitude with that of today, when setbacks often cause program cancellations or interminable delays while commissions and committees study the issues to death.

Jenkins attributed the X-15 program's success to smart people who often "made it up as they went along," balancing safety and risk so research objectives could be achieved. The program survived engine fires, explosions, hard landings, crashes, serious injuries to pilot Jack McKay and the death of pilot Mike Adams, and 40 years later is still considered to be the fount of research data on hypersonic flight.

First flown by Crossfield in 1959, the rocket-powered X-15 was developed to provide data on aerodynamics, structures, flight controls and the physiological aspects of high-speed, high-altitude flight. Three X-15 aircraft were built by North American Aviation for the joint Air Force – NASA program. Speed (Mach 6.7) and altitude (354,000 feet) records for winged aircraft set by the X-15 remained unbroken for decades. 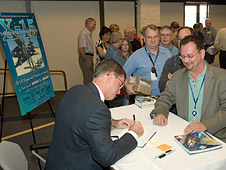 Author Dennis Jenkins found a ready clientele among Dryden employees for autographs of his works on the X-15 following his colloquium presentation Oct. 24. In addition to his recent volume on the X-15 program, Jenkins is also the author of two other works on the program, "Hypersonic: The Story of the North American X-15" and "X-15 Photo Scrapbook." He is also the author of "Space Shuttle: The History of the National Space Transportation System, the First 100 Missions," and more than 30 other works on aerospace history.