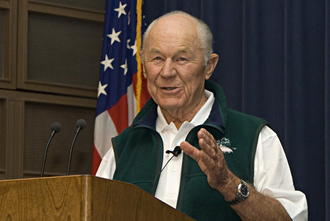 Famed test pilot Chuck Yeager, the first person to fly an aircraft faster than the speed of sound, brought his recollections of that milestone 60 years ago to an appreciative audience of NASA employees at Dryden Flight Research Center Sept. 19.

The retired Air Force brigadier general detailed his experiences as a fighter pilot during World War II and other events which led to his becoming the Air Force project pilot in the joint NACA, Air Force and Bell Aircraft X-1 rocket plane program that led to the first supersonic flight on Oct. 14, 1947. He also touched upon other highlights of his 65-year flying career during his presentation.

Yeager was at Edwards to participate in the base's 60th anniversary celebration of the establishment of the Air Force as an independent service, and was invited by Dryden center director Kevin Petersen to share his experiences at a Dryden Colloquium Series presentation.