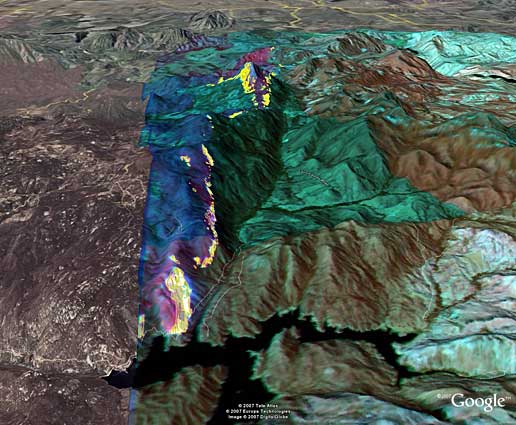 Ikhana, a General Atomics' Predator B adapted for civil science and technology research missions, has been flying long-endurance sorties lasting nine to 10 hours each beginning Oct. 24 from its base at NASA's Dryden Flight Research Center on Edwards Air Force Base.

The flights took Ikhana over the major blazes in the in the San Bernardino National Forest - the Slide and Grass Valley fires near Lake Arrowhead and Running Springs; the Ammo fire on Camp Pendleton Marine Base along the coast; and the Witch, Poomacha, McCoy and Harris fires in San Diego County. Ikhana also imaged the Santiago Fire in the Cleveland National Forest in Orange County on Friday, Oct. 26.

Ikhana carried the Autonomous Modular Scanner payload developed by NASA's Ames Research Center at Moffett Field, Calif. The equipment incorporates a sophisticated imaging sensor and real-time data communications equipment. The sensor is capable of peering through thick smoke and haze to record hot spots and the progression of wildfires over a lengthy period. The data is downlinked to NASA Ames where is it overlaid on Google Earth maps, then transmitted in near-real time to the Interagency Fire Center in Boise, Idaho, and made available to fire incident commanders to assist them in allocating their fire-fighting resources.

The flights were in response to a request for assistance from the California Office of Emergency Services and the National Interagency Fire Center (NIFC), and were coordinated with the FAA to avoid conflict with other aircraft flying in the same areas. The Ikhana flights during the daytime were complemented by nighttime imaging flights by the NIFC's Cessna Citation and an Air Force Global Hawk that are equipped with earlier-generation infrared cameras.

Pilots in a ground control station at NASA Dryden controlled the flights via satellite communications links. The missions were flown at altitudes of about 22,000 to 23,000 feet, as authorized by the FAA.

The Ikhana imaging flights were a real-world wrap-up of the Western States Fire Mission, in which NASA flew a series of four long-endurance demonstration flights of the imaging technology in cooperation with the U.S. Forest Service in August and September. Those flights, some as along as 20 hours, were funded by NASA's Science Mission Directorate, which also supported the current effort. The Federal Emergency Management Agency (FEMA) also helped fund the recent wildfire imaging flights.