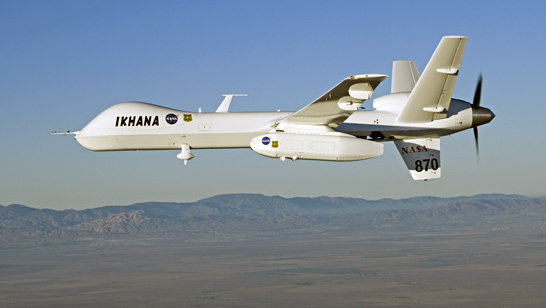 Image above: With its sensor pod under its left wing, NASA's remotely piloted Ikhana unmanned aircraft cruises over California during the Western States Fire Mission. NASA photo by Jim Ross

The flight was part of the Western States Fire Mission being conducted by NASA and the U.S. Forest Service, which is demonstrating improved wildfire imaging and mapping capabilities of a sophisticated thermal-infrared imaging sensor and real-time data communications equipment developed at NASA's Ames Research Center. Prior flights lasting as long as 20 hours in August and September took the Ikhana and its imaging payload over a number of wildfires in southern and central California, Oregon, Idaho, Washington, western Wyoming and southwestern Montana.

Thursday's flight included imaging previously burned areas in central and southern California for a Burned Area Rehabilitation and Stabilization (BAER) assessment while the Ikhana cruised at about 23,000 feet altitude in the national airspace. The aircraft then re-entered the restricted military test range airspace near Edwards and climbed to over 40,000 feet altitude in an evaluation of the Ikhana's high-altitude performance capabilities with the 420-lb. instrument pod tucked under its left wing.

Depending on the wildfire situation, one final fire imaging mission flight may be flown in Southern California within the next few weeks, after which the aircraft is scheduled to undergo modifications for another research project. 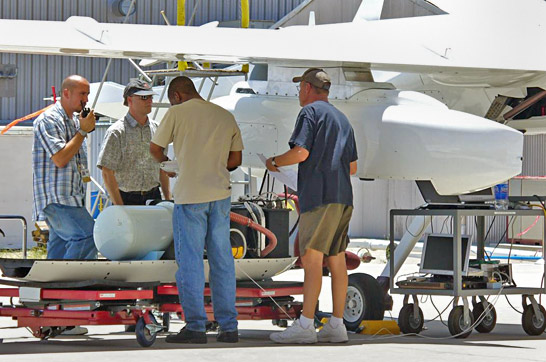 Image above: Technicians prepare to load the thermal-infrared sensors into the underwing pod on NASA Dryden's Ikhana unmanned aircraft for a wildfire imaging flight. NASA photo

The sensor is capable of peering through thick smoke and haze to record hot spots and the progression of wildfires over a lengthy period. The data is overlaid on Google Earth maps and downlinked in near-real time to the Interagency Fire Center in Boise, Idaho, and made available to fire incident commanders to assist them in allocating their fire-fighting resources.

NASA's Ikhana is a Predator B unmanned aircraft system built by General Atomics Aeronautical Systems and adapted for environmental science and technology research missions. Each flight is being coordinated with the FAA under an FAA-issued certificate of authorization to allow the remotely piloted aircraft to fly within the national airspace while maintaining separation from other aircraft.
› Back To Top